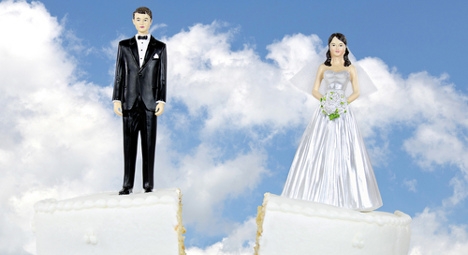 The unhappy couples had paid a company in Italy up to €4,700 to secure “quickie” divorces, sidestepping Italian law, which says that couples have to live apart for three years before legally being able to separate.

The firm used 137 county courts in Britain to hide its tracks, and used one address in Maidenhead, southern England, as proof of residency for 179 couples. A police search revealed that the address was in fact a mail box.

“It is not possible for 179 applicants or respondents to reside at this address,” police detective Jonathan Groenen said in a witness statement.
In his ruling, James Munby, President of the Family Division of the High Court, went even further:  “Indeed, given the dimensions of the mail box it is clear that not even a single individual, however small, could possibly reside in it.”
A member of staff at Burnley County Court in northern England spotted two files sharing the same address in February 2012, sparking an investigation.

Thames Valley Police found the scheme had run for two years, with each couple being charged between 3,750 and 4,700 euros.

James Munby ruled that “a decree, whether nisi (conditional) or absolute (final), will be void on the ground of fraud if the court has been materially deceived, by perjury, forgery or otherwise, into accepting that it has jurisdiction to entertain the petition”.

In England and Wales, divorces can be granted without any waiting period to couples who have been married for at least a year on the grounds of adultery, unreasonable behaviour or desertion.

Since June 18th, all arrivals from the UK have had to quarantine for five days and take two coronavirus tests under Italian health restrictions.

To stop people from attempting to make the trip regardless, “a specific ticketing policy has been put in place” for Saturday’s last eight tie, the Italian interior ministry said in a statement.

UEFA, at the behest of Italian authorities, blocked the sale and transfer of tickets from Thursday night, and also cancelled tickets sold to UK residents from midnight on Monday.

The number of blocked or cancelled tickets was not given.

England’s governing Football Association (FA) was entitled to a ticket allocation of 2,560, equating to 16 percent of the permitted capacity of 16,000 at Rome’s Stadio Olimpico.

Andrea Costa, Italian undersecretary of state for health, repeated on Thursday that any person arriving from Britain would face five days of quarantine.

“That will not allow fans who have left over the last couple of days to come and see the match,” he told Radio Capital.

“We’ll be vigilant on this quarantine, we’re not talking about a big number so the checks will not be difficult.”

The English FA has said it was working with UEFA and the British embassy in Rome to “facilitate” ticket sales to England fans resident in Italy.

But the British Embassy in Rome confirmed to The Local that it “is not selling or distributing tickets for the match on Saturday in Rome”.

The confusion on Wednesday left Italy-based England fans scrambling to find out where they could buy tickets.

British government advice is fans should not travel to Italy, an “amber list” country requiring 10 days of self-isolation upon return.

The UK is experiencing a surge in new coronavirus cases, blamed on the Delta variant that was first detected in India.