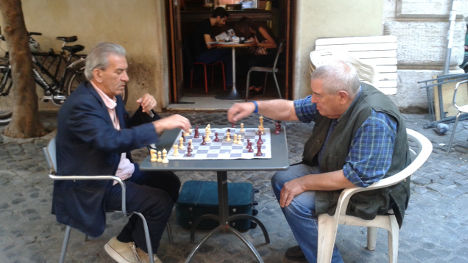 The elderly in most parts of Italy still enjoy a strong sense of community spirit. Photo: Angela Giuffrida

So why was Italy ranked among the worst countries in Europe to grow old in?

The bel paese came just 39th out of 96 countries in the Global Age Watch 2014 survey, which cited a poor safety record, below par public transport and a lack of jobs for the over-50s as the main blight on Italian pensioners' well-being.

“What nonsense!”, Andreina, who runs a restaurant in northern Rome, told The Local.

“Elderly people in Italy shouldn’t have anything to complain about: we live well, eat well and live to a ripe old age,” she opined.

“Yes, there are issues, such as potholes in the street and the government is mostly useless, but apart from that, it’s a beautiful country. There are people who are far worse off than us.”

Aurelio, a 65-year-old office worker, said the conclusion of the study was “not true”, although he admitted that things had got worse in Italy, not just for the elderly.

“It’s become a difficult country to live in for everyone, but I think that’s the same for everywhere right now, the whole world is in crisis,” he told The Local.

“At least here there’s the climate, we eat well, we have beautiful architecture and places to go. I wouldn’t want to live anywhere else.”

Aurelio added that although social connections were still strong among the elderly in Italy – he pointed to a group in his neighbourhood who congregate in the square each night to talk about football – some had dwindled due to the disappearance of community shops and bars.

“You used to be able to go to the shop, see someone you know and stop for a chat or go for coffee,” he said.

“But now many communities have lost their shops and have no choice but to go to supermarkets, where you don’t talk to anyone.”

Marco, a 59-year-old butcher, agreed with the study in parts but said Italy's main problem is its “thieving government”.

“We’re being robbed…they take money from us in every way. It doesn't matter how hard you work. It’s the same for everyone, not just the elderly.”

Paolo Andreaosi, a 60-year-old pensioner who used to work for Ericsson, said Italy’s a great place to grow old, “if you’re on a good pension”.

“I’m on a good pension so live as well as I did when I was working,” he said.

“But that is changing.”