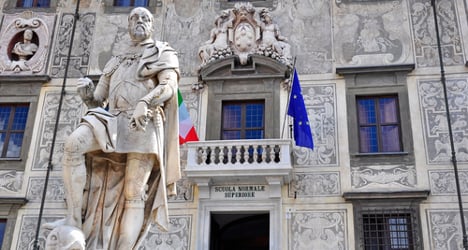 The Scuola Normale Superiore di Pisa (SNS) is the only Italian institution to make it into the top 200, having participated in the rankings for the first time this year.

The success of the arts and science institute can be put down to its “research excellence”, Phil Baty, editor of the rankings, told The Local.

“The rankings look at the citation impact; how much the research is being shared across the world,” he explained. “Pisa may not be producing huge volumes, but they are producing focused research which is very well-regarded.”

While 63rd place was Italy’s greatest success, the top ten was dominated by American and British universities. California Institute of Technology held the top position, followed by Harvard University in the US and the UK’s University of Oxford.

A dozen EU countries were represented in the top 200, including the UK with 29 universities and Germany with 12.

Baty put the Italy’s overall poor performance down to the management of the country’s academic institutions.

“There seems to be a problem with young talented academics struggling to get a foothold," he said. "There’s a lot of concern about how promotions are given out.”

In Italy management of universities is “as it’s been done for centuries,” Baty said, adding that the country “suffers from very outdated practices in terms of the reward and recognition culture.”

His view was echoed by an Italian academic last year, who told The Local “It’s extremely difficult to get into an Italian university on merit alone.”

READ MORE: 'I would never go back to Italy'

Aside from the challenges of creating a meritocracy, Baty said Italy may be falling behind due to linguistics as successful universities are increasingly working in English.

“There is an issue that the majority of leading journals tend to be in English,” he said, as the rankings use citations from 13,000 journals charted by Thomson Reuters.

“There is a challenge for European universities that English has become the lingua franca of research,” Baty said.

In order to improve their international reputation, universities must also look at their ties to power.

“Are they at arms’ length from government?” Baty asks. “US and UK universities have a large amount of autonomy from the state. They have state funding but they are independent institutions.”

It is no coincidence that such universities are the best in the world, the rankings editor said: “This leads to a healthy culture of free inquiry on campus. It also allows them to be entrepreneurial; to behave a bit more like businesses and be dynamic.”