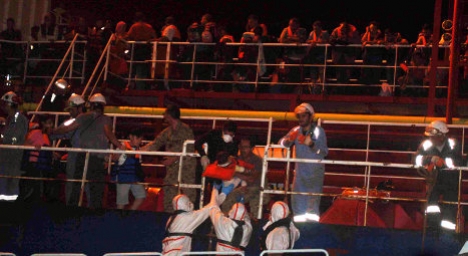 Italy's navy arrested 16 suspected people smugglers thanks to surveillance by a submarine during an operation that saved 300 migrants. Photo: Marina Militare/AFP

After a "complex surveillance operation" the navy seized a fishing boat which had been ferrying immigrants from the coast of North Africa towards Italy overnight Wednesday and took 16 traffickers into custody, it said in a statement.

Surveillance from the submarine had allowed them to watch the ship unobserved and gather the necessary proof to convict them, it said, as Italy stepped up the fight against ruthless smugglers behind the wave of immigrants attempting the perilous crossing to Europe.

The navy also rescued around 300 people who had been travelling on the fishing boat before being transferred to a small vessel by the traffickers.

Smugglers are known to use so-called "mother ships" to transport their human cargo into open sea from North Africa, before forcing them into small boats for the rest of the journey towards Italy.

Around 500 people were believed drowned last month after smugglers rammed and capsized their boat after trying to force them into a small, unseaworthy vessel.