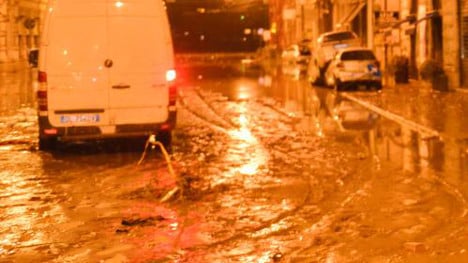 One man died after Genoa was hit with torrential rain. Photo: IlSecoloXIX

The body of Antonio Campanella, a nurse was found in an underpass close Genoa Brignole train station, IlSecolo XIX reported.

People living in the Sant’Agata area were evacuated from their homes overnight, while police  appealed to those living in other affected areas to stay at home as heavy rain continued to fall on Friday morning.

Schools have also been closed.

Meanwhile, a train making its way to the city from Turin was derailed by a mudslide on Friday morning, injuring the driver. All passengers are reported to be safe.

Four people have also been arrested for allegedly looting two shops devastated by the floods.

The floods are the worst to hit the Ligurian city since 2011, when six people, including two children, were killed.

In November last year, flash floods in and around the Sardinian port of Olbia left 17 people dead and thousands homeless.

According to a report by the Institute of Atmospheric Sciences and Climate in Bologna, rainfall in July this year was 74 percent higher than the average for the month between 1971 and 2000.

The number of regions hit by flooding has doubled to eight in the last 10 years, according to Italy's main environmental organisation Legambiente, which has called for more money to be spent on prevention.