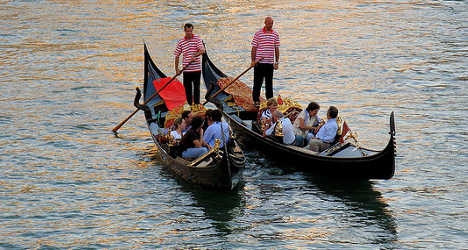 The German tourist was killed on August 17th. Photo: HarshLight/Flickr

Joachim Vogel, a 50-year-old German criminal law professor, was killed on August 17th last year following a collision between a gondola and a vaporetto waterbus on Venice’s Grand Canal.

The man’s three-year-old daughter was badly injured in the crash and his wife and two other children were also thrown into the water.

The accident occurred near the canal city’s famous Rialto Bridge as the public transport waterbus manoeuvred towards a stop, crushing the German man against the gondola.

Now Vogel’s family are taking the matter to court and are seeking €5,985,000 in damages, Venezia Today reported on Thursday.

However it is likely that an agreement will be reached outside the courtroom and the family is reportedly already in negotiations with the insurance companies of the five defendants who include a gondolier, three waterbus drivers and the driver of a motorboat.

The hearing has been adjourned to January 14th to allow time for negotiations.