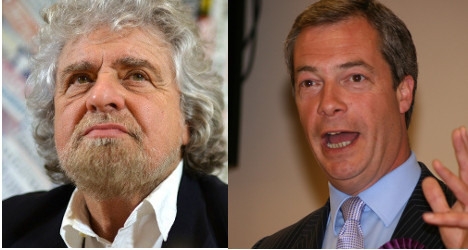 The blow to Farage comes just days after Ukip won its first parliamentary seat in Britain's House of Commons.

Seven is the minimum number of parties required to form a group in the European Parliament.

Ukip wants to pull Britain out of the European Union and is also campaigning for stronger immigration controls.

After a strong performance in May's European Parliament elections, Farage gathered together 48 MEPs for his EFDD group.

The largest contingent is made up of members from Ukip, followed by 17 from Grillo's group.

The main centre-right group in the Brussels parliament, the European People's Party, celebrated the collapse of Farage's group.