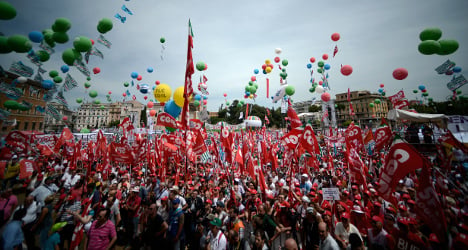 A total of 120,000 people have already booked to join the march on Saturday, not counting protesters from Rome’s Lazio region.

But the figure could jump to a million, based on a survey conducted for CGIL, Secretary General Susanna Camusso said.

Protesters will travel from across Italy, some coming from abroad to join the march, she added.

They will march under a “Work, dignity, equality. To change Italy” banner, calling on the government to put employment at the centre of its agenda.

Among the demands made by CGIL are greater public and private investment, the extension of workers’ rights and more stable employment contracts.

The union last month spoke out against government plans to make it easier for employers to hire and fire staff, an attempt to create a more flexible workforce and attract foreign investment.

Despite threats of a general strike by CGIL, Prime Minister Matteo Renzi has not been dissuaded and argues his so-called Jobs Act will help tackle crippling youth unemployment.

Tax breaks and spending cuts unveiled in Italy's 2015 budget last week have also come under scrutiny, with Camusso arguing that the plans "will keep the country in a state of recession". Finance Minister Pier Carlo Padoan, however, said on Monday that the measures could lead to the creation of 800,000 jobs in Italy.

The upcoming march comes a year after tens of thousands of people took to the streets of Rome, with a multitude of grievances. In addition to GCIL members, protesters included immigrant groups and those against a high-speed train line.