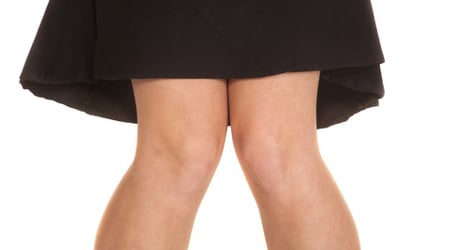 Parishioners risk being thrown out of the church if they flout the priest's guidelines. Skirt photo: Shutterstock

The dress code notice was put up by a priest outside the church in Gesico, Cagliari province, Il Mattino said on Monday.

Under the title “Is it clearer?” the notice features two women dressed in different styles.

The first shows a woman in a t-shirt and knee-length skirt, resting just above the bright yellow knees. The second wears a short top and miniskirt, marked through with a black cross.

The rules are clearly marked: no entry for those wearing sleeveless tops, plunging necklines or short skirts.

“The skirt must reach and touch the knees, don’t make the priest throw you out,” the note says.

While conservative dress is usual for places of worship, authorities elsewhere in Italy have also been trying to curb the wearing of skimpy outfits.

Earlier this year a court in southern Italy banned entry to people “dressed indecently”. A letter sent to the court’s security team requested they specifically target those wearing “shorts…clothes that are excessively low-cut and/or transparent, miniskirts, flip-flops.”