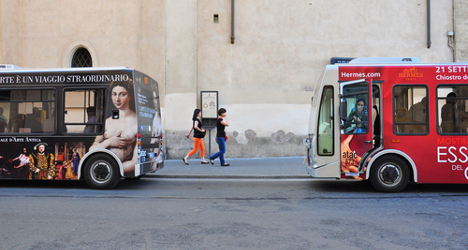 The woman was helped by a group of people waiting at a bus stop. Bus photo: Shutterstock

Fataomata Sompare, 26, was travelling on the Rome bus at lunchtime on Monday when she was attacked by a group.

After a teenager accused her of having Ebola, the girl’s relatives attacked Sompare, Il Messaggero reported.

“They told me that I had Ebola and that I had to get off the bus,” Sompare was quoted as saying.

She was saved thanks to the intervention of people waiting at a bus stop close to Grotte Celoni, in the east of the city. The police arrived and Sompare was taken to hospital, suffering from multiple bruises.

Sompare’s lawyer has now reported the incident to public prosecutors, the newspaper said.

Her partner Alessandro Corbelli said she was beaten up “only because she’s black”.

“[She is] a victim of racism which is now rampant in this city,” Corbelli said, describing the incident as “shameful”.

More broadly, this year has seen a rise in the number of attacks against bus drivers in Rome. There were 91 incidents of violence against staff in the first six months of 2014, a jump of 58 percent compared to last year, Il Messaggero reported.