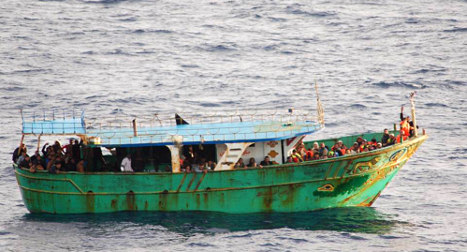 The Italian sea operation Mare Nostrum, which rescued 150,000 migrants in the Mediterranean in the past year, is due to end this week. Photo: Marina Militare Italiana/AFP

To complicate matters further, Britain said on Tuesday it won't support the planned EU search and rescue operation, arguing it will create an unintended "pull factor" for more migrants to attempt the dangerous sea crossings,

The combined efforts of the Italian navy and coast guard have saved over 150,000 men, women and children attempting the perilous crossing from the coasts of North Africa this year so far.

But with the introduction of EU border agency Frontex's "Triton" mission, it is not clear whether Italy's "Mare Nostrum" rescue mission – a large-scale deployment launched a year ago after two deadly shipwrecks – will be scaled back or closed down entirely.

"Mare Nostrum is being wound up. There will be a formal decision during one of the next cabinet meetings," Deputy Prime Minister and Interior Minister Angelino Alfano said recently.

But Alfano has also insisted the two operations are "totally distinct", as Triton will remain within European territorial waters, while Mare Nostrum rescues people in floundering boats and overcrowded dinghies from the Strait of Sicily to the coast of Libya.

Aid agencies have warned the number of deaths in the Mediterranean – which have topped 3,300 so far this year – may rise if Italy cuts the chord.

A total of 32 boats have taken part in the Mare Nostrum mission, supported by two submarines as well as planes and helicopters, according to navy figures.

On average, a total of 900 men and women are manning the decks daily and pick up an average of 400 people every 24 hours – tripling the number of arrivals in 2013.

Their work has also led to the arrest of 351 human traffickers since the mission began.

Half of those rescued are asylum seekers from Syria and Eritrea, the rest come from Gambia, Ghana, Mali, Nigeria, the Palestinian territories or Somalia.

Despite winning high praise from the UN's refugee agency, Mare Nostrum has drawn criticism both at home and in Europe from those who say it is ferrying in immigrants rather than dissuading them from coming.

The planned EU operation will do the same thing, creating "an unintended pull factor, encouraging more migrants to attempt the dangerous sea crossing and thereby leading to more tragic and unnecessary deaths," according to British foreign office minister Joyce Anelay.

London's position is to focus on "countries of origin and transit" and tackle people smugglers instead, she added.

Policing the coast also comes at a monetary cost and the Italian government, struggling to stave off a third recession in six years, is increasingly unwilling to shell out the €9.0 million ($11.4 million) a month needed.

Triton's budget is more modest, coming in at €3.0 million a month, with eight European Union countries pledging planes and boats for the operation.

Other countries will send teams to help Italy with the new arrivals – in particular with registering fingerprints, amid concerns Italy is letting too many migrants slip through the net and make it to other countries, shifting the burden to other national asylum seeker systems.

The majority of would-be refugees do not want to stay in Italy. The country registered 26,620 requests for asylum in 2013 – just 6.0 percent of the number of requests made across the European Union.

Catholic charity Caritas, Save the Children and the UNHCR have all insisted that, with a lack of commitment in Europe to finding legal ways for asylum seekers to escape their homelands, Italy cannot simply stop saving boat migrants.

In a bid to reassure critics, on October 16th Alfano said that "even after Mare Nostrum winds up, Italy will continue search and rescue missions at sea."