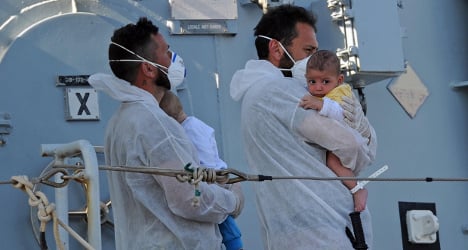 The memory of terrified parents and children being tossed out of their boat to drown in a nighttime storm haunts Captain Giuseppe Maggio, one of the men and women tasked with saving shipwrecked migrants in the Mediterranean.

"We've seen things I cannot describe. The hardest moment was one shipwreck when we managed to rescue 250 people…but with rough seas, at night, we weren't able to save everyone," the coast guard captain told AFP in Palermo port after yet another exhausting operation at sea.

His crew is one of dozens that have rescued thousands of asylum seekers attempting the perilous crossing from northern Africa as part of "Mare Nostrum" ("Our Sea"), a large-scale deployment launched by Italy after two deadly shipwrecks last year.

And with the number of deaths in the Med topping 3,300 so far this year they have no intention of stopping, despite Italy's threat to wind up its search and rescue mission.

"It does take a toll. Many of us have families, I'm a father of two and it's sometimes hard to reconcile your home life with what you have to do," he said, describing nights spent recovering bodies or searching for shipwreck survivors.

Despite the strain, Maggio says "the emotional reward is far greater than the effort and sacrifices made."

The main challenge of his 32-man crew is keeping migrants calm while transferring them quickly from unseaworthy boats to the rescue vessels.

"Timing is everything. You need to hold your nerve and make sure they know everything's going to be ok," Maggio said as 261 people from Syria, Mali and Ghana, rescued the day before, disembark from the "Fiorillo" coast guard boat.

"We're dealing with people who often cannot swim, don't speak our language and are exhausted from days in the sun. The key is to prevent panic," he said.

Social assistant Angela Puccio, who works for Palermo's city council, is on hand at the port to help with any unaccompanied minors brought in and often deals with teenagers "who have suffered physical and psychological violence."

Rushing from one makeshift tent to another, as the Red Cross and Caritas Catholic charity give new shoes, water and food packages to families waiting to be identified by police, she said the youngsters are sometimes difficult to control.

"We hear terrible stories of what they've been through, which we then carry home with us. But you can't get too wrapped up in them or you wouldn't be able to carry on," she said.

Back out at sea, navy frigate Captain Francesco Laghezza and the crew of the "San Giorgio" are scouring the area for others who may be in trouble.

The navy's long landing platform dock spends four months at a time on the front line of Mare Nostrum and has picked up over 18,000 people so far.

"The first time we saved migrants was an incredible experience, and the feeling remains the same with each new mission," said Laghezza, 41, the ship's second in command, who regularly dons a white hazmat suit to pluck migrants from their battered boats.

"The migrants have the same look in their eyes of bewilderment and fear, and I have the same sense of pride in helping rescue them," he said by satellite telephone from the ship.

Ottavia Balbi, doctor on the "San Giorgio", said she not only treats the sick but also listens to horror tales of desert journeys and devastated homelands, noting psychological traumas to flag up to charity workers who take over care of the new arrivals on the portside.

"The most difficult thing is keeping a clear head, especially while dealing with sick children. But when those we've bonded with wave goodbye to us as they disembark, it brings us huge satisfaction," the 27-year old sublieutenant said.

Despite the possible end to Mare Nostrum, Laghezza said he and the rest of the crew would "continue to save lives, regardless of the name of the mission or the flag we fly under."

"I am proud to do so. What could be nobler than rescuing men, women and children who are fleeing war and persecution?" he added.