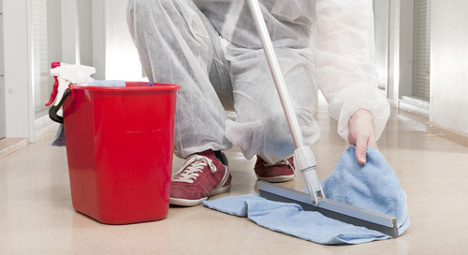 The women work as janitors at the school. Janitor photo: Shutterstock

The two women were employed as janitors by the school as part of a vocational training and integration programme financed by the EU.

The case involves Vasvja Severovic, a widow with six children, and her friend Sena Halilovic, both from the Roma community.

But since they started work at the school dozens of mothers have complained, their objections ranging from “they smell”, “they scare the children” to “they dress in a strange way with those long skirts”.

Around 40 mothers have now taken their complaints to the mayor of the town, Gianni Argiolas and demanded an explanation.

“Our children will never attend a school with two Roma janitors,” the women reportedly said.

However, quoted by the local paper Unione Sarda, the mayor described the objections as “racism” and said he refused to be swayed by such complaints.

“Aware of the lack of staff in primary and secondary schools, I asked the head teacher to employ he women for a month,” explained Argiolas.

“But as well as in schools, they will be employed in other administrative sectors to introduce them to the world of work for integration purposes.”

He added that the behaviour of the mothers should be condemned.

In the meantime, the integration project, which also involves the neighbouring town of Salargius, where there is Roma camp, is set to continue as before.

This is just the latest case of Roma discrimination to hit headlines in Italy.

In October, The Local reported on a controversial plan backed by a mayor in north-west Italy to create a bus route only for Roma people, in a move which was likened to the segregation policies of Apartheid South Africa.