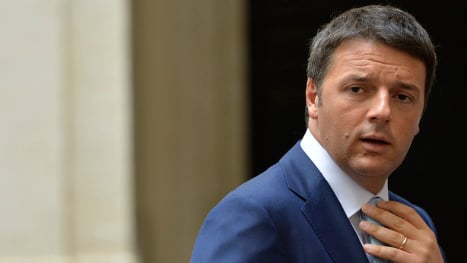 "I ask for respect for Italy, its past, its future. Or rather, I insist on the sort of respect the country deserves," the 39-year-old leader said on Twitter after Juncker made a series of swipes at the eurozone's third largest economy.

Juncker told a European Parliament hearing that he objected to Renzi and British PM David Cameron's behaviour after a summit in Brussels on October 22th and 23th, accusing them of misleading their citizens over budget talks.

Renzi had vowed to make public the cost of European Union "palaces" in a row over Italy's budget projections, earning a sharp rebuke from then-Commission president Jose Manuel Barroso.

"I said to Matteo Renzi that I was not the leader of some gang of bureaucrats," Juncker said on Tuesday.

"I am the president of the European Commission, a political institution, and I want prime ministers to respect these institutions."

Renzi was quick to reply, saying in a television interview that "I'm not going to go to Brussels to have what needs to be done explained to me, and I told Barroso and Juncker that."

"I'm not going to Europe to say 'please listen to us', I'm not going with my hat in hand," he said in the pre-recorded interview, which was set to air later on Tuesday.

Juncker had also suggested Rome was lucky to scrape through an initial review by Brussels of its 2015 budget despite running an excessive deficit, saying that "if Barroso only listened to bureaucrats, Italy's budget would have been treated differently."

Renzi, who has been facing growing protests from trade unions over planned reforms, defended his government's progress on tackling debt and boosting the flagging economy, saying: "In Italy the game has not been won or lost, but we are scoring goals."