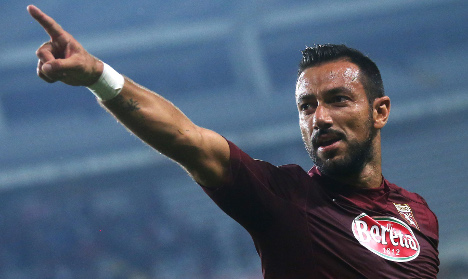 Fabio Quagliarella said a lot of foreign players in Serie A are "superfluous". Photo: Marco Bertorello/AFP

"Foreign players are great for Serie A if they add something extra, but a lot of them are superfluous," Quagliarella said in an interview with Gazzetta dello Sport's weekly magazine Sportweek.

"There are players in Lega Pro [Italy's third division] that are better. Everyone knows it, but no one does anything."

Quagliarella, who is now enjoying a career revival at Torino after three consecutive scudetto-winning seasons under Conte at Juventus, often played second fiddle to the likes of Carlos Tevez and Fernando Llorente.

But the 31-year-old has not been alone in calling for a cap on Serie A's foreign legion.

Conte, who succeeded Cesare Prandelli following Italy's first-round exit from last summer's World Cup, said last week he would like to "see more Italians playing" while under-21 team coach Gianluigi di Biagio also pointed a finger at clubs for failing to give youth players a chance.

In an attempt to nurture more homegrown talent following Italy's first-round exit from the 2010 World Cup, clubs are allowed to sign only two non-EU players during each season.

However clubs often find ways around using non-EU players, notably circumventing restrictions by "borrowing" quotas from other clubs that have no or fewer foreigners, or naturalizing players who can prove Italian family ties.

"Internazionale", the club's official name, was formed on the premise that foreign players would be particularly welcome at the club. Currently, there are ten South Americans among 23 foreigners on the books at Inter, who have space for only nine Italians including Argentinian-born Pablo Daniel Osvaldo.

Federico Bonazzoli is Inter's only Italian-born striker but despite glowing predictions the 17-year-old sits on the substitutes bench in the shadow of Argentinian pair Mauro Icardi and Rodrigo Palacio.

But Inter, Italy's last Champions League winners, in 2010, are not alone in looking to foreign shores.

From Atalanta to Udinese, 310 foreigners make up more than half of the 613 players currently registered by the league's 20 clubs this season.

Northerners Udinese top-score with 26 non-Italians for the current season while Sardinians Cagliari have only eight foreigners in their squad of 27.

Among those expected to challenge for league and Cup honours this season, Fiorentina, with 27 foreigners, sit ahead of Lazio (23), Inter (23), Roma (20), Napoli (19) and defending league champions Juventus (12).

Although the official figures are skewed by the actual starting formations, injuries and the inclusion of youth team players, the comparative lack of Italian talent is becoming conspicuous to Conte.

Asked his thoughts on the current state of Serie A, Conte told Sky Sport on Sunday: "I would like to see a few more Italians playing. I would prefer having more choice and more solutions available to me when it comes to picking players."

The phenomenon is not unique to Italy. England's cash-rich Premier League is awash with foreign stars – a recent report by the England Commission said that 64 percent of the players who started in the first six Premier League games of this season were non-English, which was down from 68 percent in 2013-14.

But it is having a trickle-down effect in Italy's under-21 squad and could, therefore, affect Italy's future prospects.

Unlike under-21 teammates Alessio Romagnoli (Sampdoria) and Domenico Berardi (Sassuolo), who have both earned praise for strong performances in Italy's top flight, Bonazzoli has played only 21 minutes in one Serie A appearance so far, at the end of last season.

This has been in spite of Inter president Erick Thohir underlining his desire to see the Nerazzurri rely more on their youth team players than costly, foreign talent.

"You have to educate the younger players and be patient with them. We also have to let them make mistakes. Instead, in Italy when you make a mistake you go back to the bench for ten games."
Di Biagio, who has qualified his side for next summer's European
Championships with players, added: "I can't ask clubs to play the youngsters
more, all I can do is adapt."