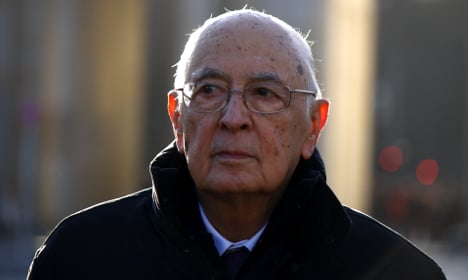 The 89-year-old president is ready to retire and will resign at the end of the year, Italian media reported on Sunday.

Napolitano will wait until Italy finishes its six-month EU presidency before stepping down over health concerns, Corriere della Sera said without citing a source.

Responding to the speculation, his office said it was up to the ageing head of state when to resign.

“The president has not denied nor confirmed any press reports on the topic,” the presidential office said in a statement.

“I’m not worried about the future of the head of state. I’m worried about doing my job well,” he was quoted by Rai News as saying.

Laura Boldrini, president of the Italian parliament, praised Napolitano while also suggesting his successor could be a woman.

“In our country there are a lot of influential women, with very significant backgrounds, therefore it’s only right that these women be considered,” she told journalists on Sunday.

Napolitano has served as president for over eight years, agreeing to a second seven-year term in April 2013 after politicians failed to agree on a successor.

He was sworn in after two months of political deadlock, with a divided parliament struggling to form a government after national elections.

Napolitano said at the time that Italy’s political and economic crises pushed him to stay on at the Quirinale Palace, but given his age he was widely expected to step down before the end of his second term.