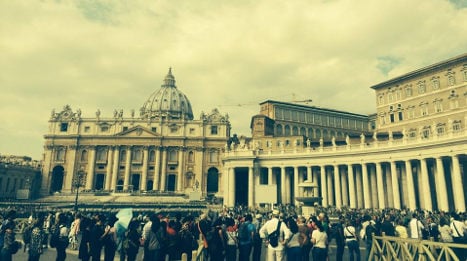 Three showers will be installed for the homeless at St Peter's Square. Photo: Julie Faris

The decision was made after Franco, a homeless man from Sardinia, turned down a dinner invitation to celebrate his 50th birthday from Archbishop Konrad Krajewski, the Vatican almoner, because he “smelled”, La Stampa reported.

“He told me that he was turning fifty that day and that he had been living on the street for ten years," he was quoted in La Stampa as saying.

“I took him [to dinner] with me nonetheless. We went to a Chinese restaurant. During dinner, he explained to me that you can always find some food in Rome. What is missing is a place to wash."

Work on the showers will begin on November 17th. A further ten have already been built at parishes across Rome, La Stampa reported.

Krajewski, 51, was appointed almoner – a centuries-old role that involves helping the poor and needy – last November.

Known as ‘Don Corrado’, he has been taking aid and provisions to the homeless for years, which is why he was chosen by Pope Francis, La Stampa said.

Krajewski said at the time of his appointment: “The Holy Father told me at the beginning: 'You can sell your desk. You don’t need it. You need to get out of the Vatican. Don’t wait for people to come ringing. You need to go out and look for the poor'."