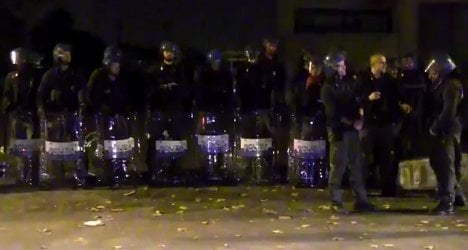 Dozens of unaccompanied children were moved from the centre in Tor Sapienza to safer facilities on Thursday, as locals hurled stones and bottles on a fourth day of violence, Ansa reported.

Riot police were dispatched to the deprived eastern Rome suburb on Tuesday as tensions mounted, with the latest attacks reportedly sparked after a bar refused to let a group of migrants in.

"We are scared. We are trying to find a compromise with the residents," Francesco Amato, a centre official, told the Associated Press news agency.

The violence comes at a time when Italy is seeing record numbers of refugees land on its shores due to turmoil Syria and Africa.

“Don’t come here, it’s not for you,” one resident was quoted in Ansa as saying, while another said: “They have to send them out because this city is Italian.”

Residents told the Associated Press they are not racist but are "fed up with years of neglect by government authorities who have allowed gypsies, migrants and asylum seekers to settle in Rome’s peripheries without providing adequate services."

A statement from the office of Rome Mayor Ignazio Marino said "serious damage" had been done to the centre, which mostly hosts minors, and that the city “rejects all forms of violence, racism and xenophobia”.

"It is very worrying that in Tor Sapienza people are taking aim at a small shelter, where people fleeing war and persecution, including unaccompanied children, have a right to be protected," he said in an online statement.