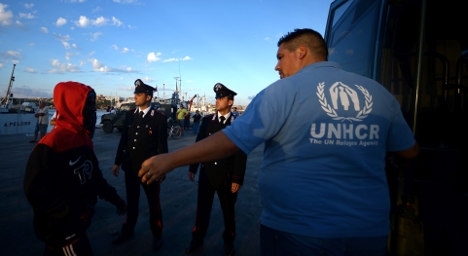 Italy ends up allowing just over 60 percent of asylum applicants to stay in the country. Photo: Filippo Monteforte/AFP

In a reflection of the dramatic surge in the numbers of migrants reaching Italy's shores from North Africa, there were 25,401 applications for refugee status between January and June, compared with 26,520 in the previous 12 months, according to a report produced by NGOs including Caritas in collaboration with the UN refugee agency (UNHCR).

More than 150,000 migrants have landed in Italy this year. Many of them were rescued from the Mediterranean by the Italian navy after their own overcrowded barely seaworthy vessels got into difficulty.

And there is no sign of a let-up in an influx which is becoming an increasingly controversial issue in Italian politics. The navy reported over 2,500 new arrivals in ports in Sicily and the southern mainland over the weekend.

Aid organizations say the bulk of those arriving in Italy have a genuine claim to refuge having fled conflict or persecution in places like Iraq, the Palestinian territories, Syria, Eritrea or unbearable poverty and bonded labour in parts of Africa and South Asia.

Experts in the field say a relatively small proportion of new arrivals in Italy apply for asylum because many prefer to continue their journeys, clandestinely, to northern Europe.

More than half of this year's arrivals in Italy have come from war-wracked Syria or Eritrea, a former Italian colony. But the biggest number of asylum applications came from nationals of Mali, which has been destabilized by a three-way conflict involving Islamists, Tuareg groups and government forces backed by former colonial power France.

Some 93 percent of asylum applicants are still men, despite the latest boats arriving often including higher proportions of women and children than ever seen before.

Italy ends up allowing just over 60 percent of applicants to stay in the country. Of 24,000 cases processed in 2013, only 13 percent resulted in the applicant getting full refugee status.

Although nearly all migrants land in southern Italy, they are quickly redistributed around the country and municipal authorities in a number of towns and cities are beginning to say that their ability to cope has reached breaking point.

Rome, which receives about a fifth of the asylum seekers, has demanded a review of the system following violent clashes last week in which residents of a city neighbourhood housing three centres for migrants laid siege to one of them in a bid to force the removal of the inhabitants.