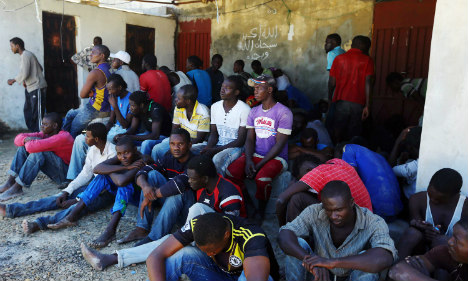 The Italian coastguard said it helped pluck 520 people from five boats in trouble in Libyan waters overnight Thursday to Friday after a communications centre in Rome traced distress calls sent by cellphone from the boats heading towards Sicily.

The coastguard then sailed to waters north of Tripoli, the Libyan capital, to help two merchant vessels which had picked up more distress signals. Two groups of 78 and 93 people were also saved.

There were no details on their nationalities.

Libya's navy announced that on Friday it had rescued 105 migrants from a boat that broke down off the coast of Garabulli, which is around 50 kilometres (31 miles) east of Tripoli.

Despite the onset of autumn, which usually brings a slowdown in migrant numbers, Italian authorities this week alone rescued several thousand people. The coastguard and navy say migrants are taking increasingly high risks.

Last year saw almost 8,000 people arrive in the first six months, followed by 35,000 in the second half of the year.

Greek port authorities meanwhile said 16 people had been rescued but four were missing when a boat carrying mostly Syrian refugees capsized off Mytilene. An Uzbek national was detained on suspicion of human trafficking.