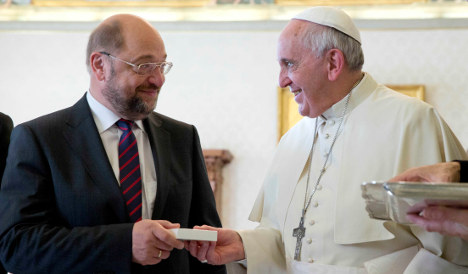 It will be the second visit by a pope to the parliament in the French city of Strasbourg – a lightning, four-hour trip which will see Francis address both lawmakers and the Council of Europe.

The pontiff has in the past dubbed Europe a "tired" continent which has lost its way, criticizing its high unemployment, a declining birthrate and poor treatment of the marginalized and elderly by those in thrall to "the idol of money".

The climate has changed greatly since the last papal visit to the French city in 1988, and Vatican watchers say the Argentine pontiff will have to fight harder to be heard in an increasingly secular continent.

The 77-year old had been criticized for neglecting Europe since his election in February last year, preferring to focus on areas of potential growth for the Catholic Church, such as Asia.

He then surprised many by choosing Albania – a poor country outside the European Union – as his first destination, a decision which experts said underlined his desire to see European ideals applied across borders rather than along institutionally-defined lines.

The Pope is expected to repeat his call for greater tolerance, social inclusion and dialogue as a recourse to a rise in racism and radicalization in countries hit hard by the economic crisis and the austerity measures imposed to overcome it.

Nationalist, Eurosceptic and anti-immigration parties in several countries scored victories in European Parliament elections in May on the back of widespread frustration with Brussels.

Europe is also grappling with the departure of hundreds of citizens for Syria and Iraq, where they openly join jihadist groups and urge others to follow.

The leader of the world's 1.2 billion Roman Catholics will likely call for more to be done to tackle youth unemployment – which stands at an average 21.6 percent in the continent – and to care for those fleeing war zones and persecution.

His visit has sparked protests in some quarters, with critics slamming European Parliament head Martin Schulz's decision to invite a religious leader to address a secular body.

But in an editorial published Sunday in the Vatican daily l'Osservatore Romano, Schulz rejected the criticism and said he believed Francis would "wake Europe from its lethargy".

"As president of the parliament I can only say that the church has played a leading role in limiting the material and immaterial damage from the economic crisis," Schulz said.

While the European People's Party (EPP) – the largest in parliament – was founded by Christian Democratic parties in the 1970s, ties to the Catholic Church have eroded over time and the Vatican has little clout in contemporary European politics.

According to the Italian Catholic news agency SIR, the parliament's directorate-general for external policies published an internal report ahead of Francis's visit which flagged up major differences between the Vatican and Europe on issues from the free market to gender theories.

Many, particularly in the Church's conservative arm, will be watching closely to see whether Francis will address hot-button topics such as gay marriage, abortion and euthanasia – particularly after a slew of recent legislative changes in European countries.

He has warned Catholic leaders against focusing too much on divisive issues and has avoided making strong pronouncements on such topics himself.

He is more likely, 25 years after the fall of the Berlin wall, to urge Europeans to continue on the path of inclusion rather than lending their ears to those who would bolster borders.

On the 100th anniversary of the start of the First World War, Francis may also call for peace in Ukraine and other conflict zones.