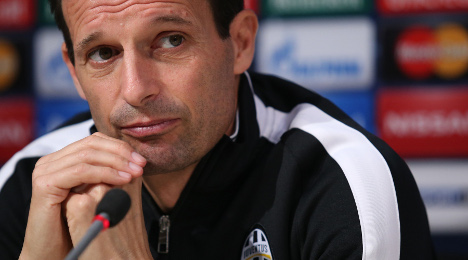 Second-half goals from Fernandro Llorente and Carlos Tevez gave a huge boost to Juve's qualifying hopes on Wednesday when Allegri's men secured a valuable 2-0 win over Malmo in Sweden.

It was Juve's first away win in the competition in six attempts and left the Turin giants second in the group, three points behind Atletico and three ahead of Olympiakos, who suffered a 4-0 defeat in Spain to the La Liga champions.

Allegri was pilloried in the Italian sports press following Juve's 3-2 home win over Olympiakos two weeks ago when he claimed the Old Lady could realistically oust the Spanish champions from top spot in the group.

After Wednesday's win left Juve requiring only a draw to go through, Allegri was sticking to his guns. "Against Atletico we need to play at our very best and win by two goals if we want to finish top of the group," Allegri said.

"It will be a great match. But first and foremost, we have to secure our qualification."

Adopting the same 4-3-1-2 formation that beat Lazio 3-0 last weekend, Allegri's men overcame a messy opening half on a poor playing surface to create a host of chances after the restart.

Yet before Carlos Tevez's 88th minute strike, the 48-year-old was seen gesticulating and kicking wildly on the touchlines as Juve failed to put chance after chance away.

Allegri admitted: "I was very angry, we created a lot of great chances and simply had to settle the match much earlier.

"We have to be more clinical, especially in matches that are vitally important."

A Vidal cross then found Tevez in front of goal but the Argentina striker's effort was just off target.

Juve finally broke the deadlock on 49 minutes when Llorente ran on to Marchisio's through ball to hold off his marker and round Olsen before slipping the ball into the net.

It was Llorente's third Champions League goal, but first of the season and clearly gave the visitors a confidence boost.

Marchisio tested Olsen again minutes later and on 71 minutes Simone Padoin delivered for Llorente to head straight to the keeper.

Llorente made way for Alvaro Morata moments later but on 87 minutes the former Real Madrid striker's prod from Tevez's drive across goal came off the underside of Olsen's bar.

Tevez finally secured the win when a long ball from midfield towards Morata was headed into the path of Paul Pogba by defender Erik Johansson.

Pogba picked up the loose ball and squared for Tevez to beat the onrushing Olsen with an angled bobbling strike.

It was Tevez's first away goal in the competition in over six years, and the Argentinian said: "The pitch wasn't in good condition, but it helped my shot go in so I can't complain."

Juventus will be looking for a far more clinical performance in Turin on December 9th against Atletico, who snatched a 1-0 win from a tight encounter when the sides last met at the Vicente Calderon stadium. A draw will see Juventus through, but the Bianconeri seem to have higher aims.

"It will be like a final against Atletico," said Marchisio. "We played well in Madrid, even though we lost the game.

"Qualification is the most important thing but we will try to win our final game and, if things go well, we will also try to score more and finish first."