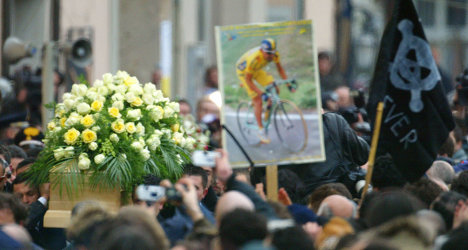 Pantani died of acute cocaine poisoning in a Rimini hotel room on February 14th 2004, after a steady fall from grace following his expulsion from the 1999 Giro d'Italia for suspected doping.

However a fresh investigation into the death of the 34-year-old cyclist was reopened by prosecutors in Rimini last month after fresh evidence emerged which, it is claimed, supports the theory of foul play.

Media reports have since speculated that key evidence found in Pantani's hotel room may have become contaminated because several investigators did not wear gloves, and that a bottle found close to Pantani's body was not analysed.

Five police officers from the original investigation have now threatened to sue, according to a statement by their legal team.

"We can no longer sit here in silence and, above all, continue to tolerate what amounts to a media lynching which has taken on intolerable proportions," said the officers' lawyers Moreno Maresi and Mattia Lanciani.

The announcement comes hours before a press conference in Rimini where a new book about the fallen Italian cycling icon is expected to rubbish claims that Pantani was the victim of murder, a theory supported by Pantani's family.

Doubts over the death of Italy's favourite cycling son have failed to dissipate since his death a decade ago, and recent reports have only served to fire the public's imagination.

Reports last month cited convicted killer Renato Vallanzasca, who claimed to have been advised, in 1999, by a fellow inmate at Novara prison to bet a large sum of money on Pantani "not winning the Giro d'Italia".

It has been suggested that underworld figures with interests in black-market betting somehow played a role in having Pantani's removed from the race.

Pantani's expulsion from the 1999 Giro caused a huge scandal and is generally considered the incident which led to his tragic death five years later.

Claiming to be the victim of a conspiracy, the Italian turned to cocaine and although he attempted a return to the top of his sport, his addiction to the drug ultimately led to his downfall.

The 2004 investigation into his death, led by Sabatino Riccio, affirmed Pantani died from a heart attack brought on by acute cocaine poisoning.

Although recent media speculation has shed new light on the initial investigation, lawyers Maresi and Lanciani have hit out at the "highly defamatory reports".

"In something resembling a serialized soap opera, key episodes in the inquiry have been chronicled and assembled into a single storyline that leads, on one side, to the contention that Pantani's death did not take place in the terms determined by the investigations of the Public Prosecutor's Office in Rimini and, on the other, to categorical acceptance of a hypothesis of homicide.

"The detectives of the Serious Crime Squad at the Rimini Questura who, at the time of the famous cyclist's death, conducted these inquiries, have been subjected to a veritable deluge of accusations taking every conceivable form and regarding the conduct of the inquiry's many dimensions.

"Our clients went about their delicate task of investigating the death of Pantani dutifully, diligently and expeditiously."