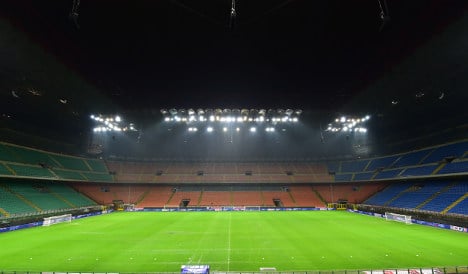 The proposals would see AC Milan move away from the San Siro ground, Photo: Giuseppe Cacace/AFP

The proposals, according to Gazzetta dello Sport, would see the club move away from the San Siro ground they share with Inter to a site adjacent to the club's recently-built 'Casa Milan' headquarters in the neighborhood of Fiera, known for hosting some of Europe's biggest trade fairs.

If sanctioned by the Fiera Foundation – the company which manages business proposals in the area – work on the 42,000-capacity venue could start in 2016 and be completed by 2020.

The new stadium plans have been drawn up by Fabio Novembre, the architect behind Casa Milan, and are partly-inspired by Bayern Munich's former home, the Olympic Stadium, as well as Juventus Stadium in Turin, added the report.

Milan's new ground would feature a huge commercial space underneath the stadium, along the lines of Bayern's former home.

Above ground, Milan have been inspired by Juventus Stadium in Turin, where the proximity of fans to the pitch and special sound-enhancing panels help create an intimate and intense atmosphere.

If named the Emirates, Milan would join Arsenal in seeing its stadium named after the club's principal sponsor.

Milan's current ground, the 'Giuseppe Meazza', popularly known as the San Siro, holds approximately 80,000 fans but amid a country-wide economic crisis which has also seen the riches of Serie A's top clubs dwindle, the ground is rarely filled to capacity.

Plans for Milan's new stadium are being driven by Barbara Berlusconi, the 30-year-old daughter of club owner and president Silvio Berlusconi and a vice-president of the seven-time European champions.

Milan's proposals have already been accepted on principle by city authorities, said the report, although the club is now awaiting an official response from the executive committee of the Fiera Foundation.

Serie A giants Milan last won the league title in 2011 and, having seen an exodus of players the following season, have struggled to keep pace with 30-times champions Juventus in recent years.

Milan last played in the Champions League last season when the Rossoneri failed to get past the last 16 and last won Europe's premier club event in 2007 under the helm of current Real Madrid coach Carlo Ancelotti.

Filippo Inzaghi's current side sit seventh in Serie A, 14 points behind leaders Juventus and five behind Genoa in the third and last Champions League qualifying spot.