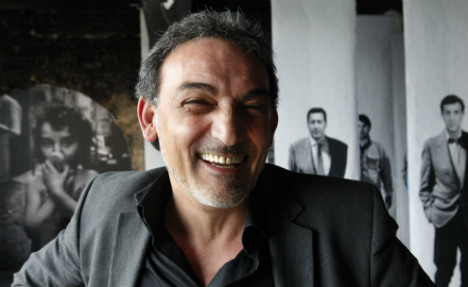 Featuring the work of more than 80 female artists from all over the world, the "I am Woman" collection is the latest brainchild of master of provocation Antonio Manfredi, the director of the Contemporary Art Museum (CAM) in Casoria.

The down-at-heel suburb of Naples is better known for its association with the area's notorious criminal clan, the Camorra, than cutting-edge modern art.

"There's a museum in Casoria?" says a sceptical taxi driver at the southern city's central station. "I'll get you there but it is right out of town, so it will cost you twice what's on the meter!"

Five stops for directions later and the men selling contraband cigarettes on the street half a mile from the CAM also profess to never having heard of it.

The tale provokes a chuckle from the amiable Manfredi, a 53-year-old son of Casoria whose horizons were broadened by his success as a sculptor and photo-artist in a career which has included several stints working in China.

"It's not that they don't know we are here, it is more like they could never imagine that we are here!" he says. "We are like Martians who landed in a white spaceship."

Manfredi has courted publicity in the past by burning some of the museum's artworks in a self-styled "Art War" protest over cuts in Italy's culture budget and by asking Germany to grant him asylum from persecution by both the government and the mafia.

In keeping with that flair for free publicity, he has billed "I am Woman", which runs to March 8, as the biggest ever all-female collection of modern artworks.

"Here, in what they call the Camorra triangle, just the fact of having a contemporary art museum is a provocation," he says. "The idea is to be an open eye that opens the eyes of others."

It is not a message that goes down well with the bosses of the local mob and Manfredi has received regular, sometimes chilling, reminders of their power since the museum opened in 2005.

Soon afterwards, the local mayor who got Manfredi involved was removed from office as part of a collective clear-out by the regional prefect, who had decided the Camorra was so extensively entangled in the running of the district, which has a population of 100,000, that it was time to start again.

When the museum put on an exhibition of the work of African artists, a black doll that had been extensively slashed was left at the door. Manfredi believes it was a coded message from a crime syndicate which controls the supply of clandestine African workers who labour in the local fields for €20 a day.

"To the Camorra, Africans are only slaves, so they didn't like us representing them as intellectuals and artists."

Another warning came one Christmas, when a someone called the museum enquiring as to whether the director would like a coat as a gift.

"If you are from here and you know the jargon, you know that a coat doesn't mean a coat, it means a coffin."

The latest exhibition is also unlikely to meet with the mob's approval, Manfredi says.

"For the Camorra, African women are only prostitutes. So to have an exhibition here, with contributions by women from Asia, Africa and the Middle East is like a provocation. It wouldn't be in Dusseldorf or Edinburgh, but here, yes, that is what it is."

"I am Woman" addresses themes spanning domestic violence, paedophilia, self-image and censorship, through the mediums of photography, painting and video as well as installations and performance works.

The result is a thought-provoking ensemble that Manfredi and his team hope will highlight Italy's under-reported problem of conjugal violence while simultaneously celebrating women's strength and beauty.

Among the many intriguing works are the Brazilian Helenita Peruzzo's images of "mattress woman" and a collection of photographs by Yemeni artist Angham Azhar depicting fully-veiled women playing rock guitar, squinting at a Mac laptop and reading the Koran by torchlight.

Even darker issues are explored in German painter Astrid Stofhas's pictorial representation of paedophilia via a powerfully disturbing image of a lithe and elegantly dressed man with a crocodile's head languidly smoking a cigarette while a young girl kneels at his feet, clutching a doll anxiously to her chest.

Brazilian artist Cassia Aresta has contributed a calendar dotted with red blood stains as if a victim of domestic abuse was keeping a diary of her beatings.