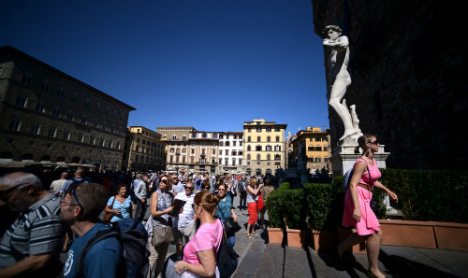 The tremors reached a maximum magnitude of 4.1 but were sufficiently powerful to result in some schools, houses and offices being evacuated.

Tourist access to the Palazzo Vecchio, the Renaissance town hall in Florence, was briefly suspended while its Arnolfo tower and the Mangia tower on Siena's Campo (central piazza) were closed until further notice while checks for structural damage were carried out.

The epicentre of the strongest quake was nine kilometres (six miles) below ground close to Greve in Chianti, one of the best known wine villages in an area of rolling hills around and between Florence and Siena.

The area lies in the foothills of the central section of the Apennine mountains, which run like a spine down the centre of Italy and are subject to significant seismic activity.

The National Institute for Geophysics and Vulcanology (INGV) said there had been more than 80 tremors since early Thursday with the strongest measuring 4.1 coming in mid-morning on Friday.

INGV seismologist Alessandro Amato said it was impossible to predict how long the tremors would continue for. The seismic activity was similar to tremor patterns seen in other parts of Italy recently, he added.