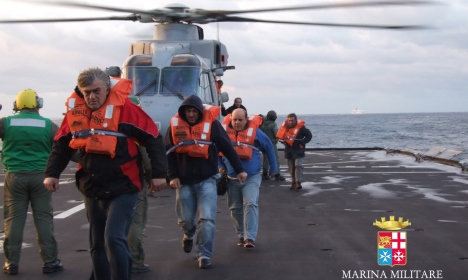 Seven people died after the Norman Atlantic car ferry with 478 passengers and crew caught fire off the coast of Albania.

Nick Channing-Williams, 37, who teaches horse jumping in Athens, said he was part of a group of crew members and passengers who had tried to link the ship to a tug boat in stormy seas.

"After the third time of the rope snapping on us, that was when we gave up," he told Sky News.

He said the group ended up spending the night trapped in a lower section of the ship, where the ropes were, because the fire had started again. They eventually made their way up a rope to be airlifted out. Asked to explain his blackened appearance he said: "I think it was more grease than soot."

"There were moments when I was absolutely terrified," he added.

"When the flames are licking up around the boat and there's no sign of help and they're talking about sending a boat that is four hours away, you feel somewhat helpless."

The evacuation was completed nearly 36 hours after the fire broke out on the car deck and left the huge vessel drifting dangerously in high seas.

Channing-Williams's mother Dottie said she barely recognized her son when she was sent a picture of him by an Italian air force captain, Paolo Papi, who was aiding the rescue effort.

A British survivor of the #NormanAtlantic ferry blaze – covered in soot from the fire http://t.co/qDjSeNWlmo pic.twitter.com/K8ozVMdWZI

"I couldn't believe it was him as his face was covered in soot and he was black. He also sent me an after shower picture and I could see it really was him," she told BBC radio.

Channing-Williams described first seeing the fire in the early hours of Sunday: "The flames were huge, all the cars were on fire."

"Everyone was in a queue to get on a lifeboat and with the heat just being so enormous people just panicked," he said.

"There was only one place you could stand – in the rain… In the evening it was even worse because the ship was tipping to one side," he said.

His Greek fiancée Regina was airlifted from the ship before him and the two were only reunited in an Italian hospital. "It was quite an emotional reunion because we were separated for a few hours," he said.