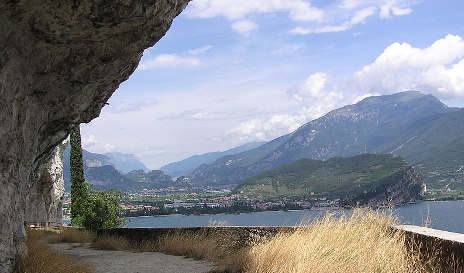 The girl died after accidentally shooting herself with her father's gun at the family home in Pregasina, near Riva Del Garda. Photo: Henning Leweke

Stella Perderzolli died after firing the pistol which she took from a drawer in the family home in Pregasina, near the picturesque tourist town of Riva Del Garda, in the region of Trentino Alto Adige.

The Beretta pistol belonged to her father, Elvio, a 38-year-old police officer, and was kept hidden inside a drawer in the wardrobe of his bedroom.

Elvio Pederzolli and his wife Francesca Migliorati were in the garden outside the house when the accident occurred, Italian media reported.

They told police their daughter had not wanted to leave the house because of the cold winter weather and was playing with a videogame when her parents stepped outside.

The couple found the girl in a pool of blood with a bullet wound to the temple and immediately called police and ambulance personnel.

The family had moved to Pregasina after Pederzolli was transferred to the town for his job.

A shaken Pederzolli and his wife told police they were convinced the girl’s death was not suicide but misadventure.

After reconstructing the events surrounding the girl’s death, local prosecutor Fabrizio De Angelis, said there was no doubt the death of the girl was a tragic accident.