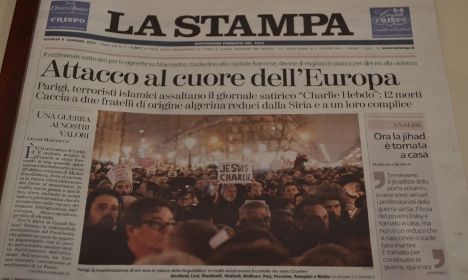 The Charlie Hebdo shooting in Paris was the front page story across Italy on Thursday morning, as the manhunt continues in France for the two men believed to be responsible for the mass killing.

The image shows the moment a masked gunman killed a policeman, one of the 12 victims including another officer and a number of cartoonists who worked for the satirical magazine.

The image was reproduced by numerous other newspapers in Italy, including La Repubblica's "Jihad, massacre at the newspaper" front page.

Rome daily Il Messaggero described the attack as an "Islamic massacre against freedom".

Just one of Italy's top newspapers ran with a picture of one of the numerous vigils held on Wednesday night in France and around the world. Tens of thousands of people gathered to show their support for the families of those killed, many holding "Je suis Charlie" ("I am Charlie") signs.

"An attack at the heart of Europe," read La Stampa's front page.

The right-wing Libero newspaper ran a "This is Islam" front page, as the killers are thought to be religious extremists.

Muslim leaders have been quick to denounce the shooting and assert that the actions of the armed men are in no way representative of Islam or France's five million Muslims.