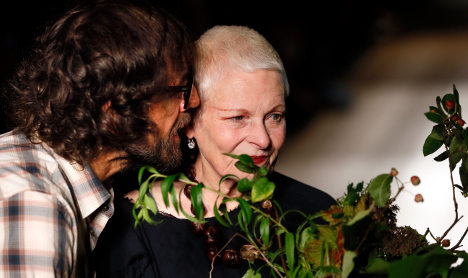 Sporting a beret and a typically wry smile, the face of the heir to the British throne made a surprise appearance in Milan, emblazoned on the T-shirt the veteran designer wore as she took the applause at the end of her 2015-16 autumn/winter show.

"I've been a big fan of Prince Charles for a long time and I have spoken to him and even tried to help him sometimes with getting support for his project to save the rainforests," Westwood told AFP-TV.

"He invited me to come and see him at (the prince's country residence) Highgrove, I've had quite long chats with Prince Charles – I think he's absolutely wonderful."

Westwood, whose designs helped shape the look of British punks in the 1970s, added: "He's a visionary. Right back in the 1970s as a young man, he realised we have to live in harmony with the earth.

"And all his charities have made such a difference, they've really helped people, they're very practical and solid things, they build communities, support people. It really works on a very human way all his charities. We would have a wonderful world if he had ruled it in all that time.

Westwood's husband, the Austrian designer Andreas Kronthaler, is also a fan, describing the prince as both charismatic and stylish.

"I really like his dress sense, his clothing. He has a very traditional old English gentleman's way of dressing," Kronthaler said.

"He'd wear jackets with holes in them, that are moth-eaten and that are sometimes 20 or 30 years old; he gets his stuff mended… I really like that a lot."

Westwood, now 73, was made a dame for services to fashion by Charles's mother Queen Elizabeth II, in 2006.

She said her latest collection was partly inspired by the heir's fondness for the bespoke tailoring of London's Savile Row, despite the conservatism of that look apparently being at odds with her history of anti-establishment politics and stunts.

"Savile Row, that is a standard and I'm very glad we've got that standard of dress because otherwise men would look like women, they would just wear anything," Westwood said.

"Rules are always very good to break and you can make it very personal looking with your neck tie and all kinds of choices, with textures and shirts.

I love the Savile Row look and that's what he wears. I know he likes uniforms as well. But all men don't stick to that standard terribly well, they definitely break it."

"The British love their countryside and they love to pretend, even in the middle of London, that they're in the middle of the Highlands – the gardens, the stupid big Range Rovers, Wellington boots.

"The message overall is what we've been promoting for years: buy less, chose well, make it last."

As well as backing Prince Charles's environmental concerns, the designer couple are also currently engaged in a fight to protect the last surviving gorillas in the wilds of Congo.

"People are going in there trying to go for the oil and the shale gas. There are people there who are trying to defend this park – it's just insane what they're up to again, some of these big companies," said Kronthaler."