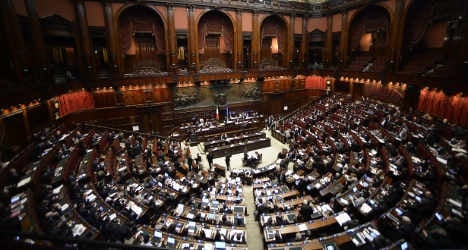 The upper house of parliament voted 175 to 110 to adopt a "super-amendment" to the existing law, which should result in strong governments with clear parliamentary majorities rather than bickering and shaky coalitions.

"We want a stable period not a continuous change of government," Renzi said during a speech at the World Economic Forum in Davos, adding that the electoral law overhaul was part of "an incredible season of reforms" needed in the eurozone's third largest economy.

The details were hammered out on Tuesday at a meeting between Renzi and his disgraced right-wing predecessor – an arrangement which has angered some on both the left and right, each accusing their own leader of being in cahoots with the enemy.

The new law effectively throws out thousands of amendments presented by the opposition, speeding up a definitive adoption in the coming days of a reform the 40-year-old prime minister has made a keystone of his mandate.

The new law envisages a "winner's premium" of extra seats for the party which wins over 40 percent of the vote at a general election, which would give it a majority 55 percent – and 340 of 630 seats in the lower house of parliament.

If no party manages to get 40 percent during the first round, there will be a run-off two weeks later between the two leading parties.

The law also lowers the threshold for getting into parliament to 3.0 percent of the vote per party, meaning the smaller parties are assured of seats but will not have the power to bring down the government.

It still has to be adopted by the lower house but the law is not expected to run into difficulty because the government's majority is stronger than in the Senate.

Renzi's ability to maintain cooperation with Berlusconi is being seen as key to his ability to deliver on a wide-ranging programme of promised reforms which spans the economy and the legal system as well as the electoral system and constitution.