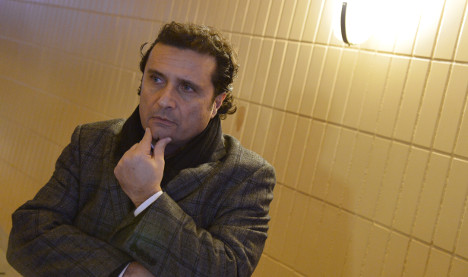 Ex-captain of the Costa Concordia, Francesco Schettino, during a break at his trial on Monday. Photo: Alberto Pizzoli/AFP

Prosecutors have requested a minimum 26-year prison sentence for the man dubbed "Captain Coward" who stands accused of causing the shipwreck off an Italian island that left 32 people dead and abandoning ship with passengers and crew still on board.

As final summing-up in his 19-month trial began on Monday, defence lawyer Domenico Pepe said Schettino should not be made the sole scapegoat for the Italian tragedy.

"If the court has to impose a penalty, we believe it should be the minimum one in light of the attenuating circumstances," Pepe told the court.

Pepe devoted a significant part of his final address to an attempt to demolish the argument that Schettino had disastrously and negligently delayed issuing an order to abandon ship after it hit under-water rocks off the Tuscan island of Giglio in the dark on the evening of January 13, 2012.

Schettino's years of experience as a seaman had correctly led him to believe that the tide and wind conditions meant that the listing ship would drift towards the shoreline, at which point an evacuation order would be much safer and quicker to implement, his lawyer said.

"If he had ordered an evacuation a kilometre away from the coast, the boat would have been uncontrollable and the lifeboats could not have been safely launched," Pepe said.

"Schettino had 45 minutes to decide what to do with (nearly) 4,500 lives at risk – his decision ensured that the vast majority of them were saved," Pepe added.

Schettino testified earlier in his trial that he had wanted to avoid a general panic resulting in passengers throwing themselves into the water.

He also blames his crew for failing to alert him to the rock and says the primary cause of the 32 deaths was the fact that the ship lost all power because of the failure of a back-up generator.

Schettino, 54, has admitted setting the giant cruise ship on a course close to the coastline in order to show off, but maintains such actions were standard practice in the industry and sanctioned by the company as a way to keep passengers entertained.

He insists he did not flee the ship but rather fell off when it tilted and says he was then instructed by the ship's owner not to return to the stricken liner.

That version of events was contradicted earlier in the trial by a recording of a phone call in which a coast guard official is heard upbraiding Schettino and ordering him, in vain, to "get back on board, for fuck's sake."

Prosecutors say the 32 deaths were caused by Schettino's "cowardly" management of the emergency.

They have called for Schettino to serve 14 years for multiple manslaughter, nine for causing a shipwreck, three for abandoning ship and three months for lying to maritime authorities.