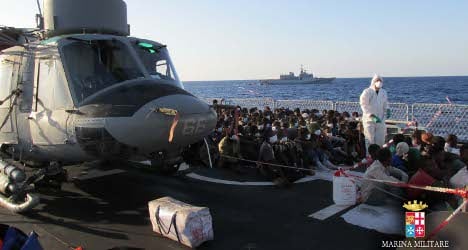 The EU’s dedicated mission to patrol waters off the southern coast is an inadequate replacement of Italy’s own “Mare Nostrum” (“Our Sea”) migrant rescue operation, which came to an end last year, UNHCR spokesman Adrian Edwards said.

He was speaking a day after Italian authorities said at least 29 boat migrants had died of hypothermia while trying to reach Europe. Seven bodies were found by the coastguard on the converted fishing boat, while a further 22 people died before they arrived in the Italian island of Lampedusa.

The deaths have led to speculation that had Mare Nostrum still been in operation, more lives could have been saved.

Edwards said that 3,500 people died crossing the Mediterranean last year, “a number that would have been higher if not for the efforts of Italy’s Mare Nostrum rescue operation, which is no longer in operation.”

He pushed for greater EU support for Italy’s rescue efforts, saying Triton and the European Asylum Support Office “cannot be the only form of solidarity and humanity Europe can demonstrate”.

Fifty people have died so far this year crossing the Mediterranean and 3,528 have arrived in Italy, compared to 12 deaths and 2,171 arrivals in the same period last year, according to UN figures.

The EU’s current approach to the increasing numbers of refugees was also criticized by Save the Children.

“How many of these tragedies can the international community watch from the shores before we are morally compelled to respond? It is not acceptable to prioritize border control over life-saving rescue missions,” CEO Justin Forsyth said in a statement.

He pointed out that Syrians made up the largest group of boat arrivals to Italy, fleeing civil war, and called on “rich countries to take in their fare share of vulnerable families”.

Dimitris Avramopoulos, the EU’s home affairs commissioner, expressed his “regret” over the latest deaths. “Our fight against smugglers continues in a relentless & coordinated way. More has to be done,” he wrote on Twitter.

The drama is ongoing. Our fight against smugglers continues in a relentless & coordinated way. More has to be done. #Lampedusa

But the mayor of Lampedusa, Giusi Nicolini, said “Europe has again decided to leave Italy alone.”

She also criticized Triton as a border control mission which failed to do the work of Mare Nostrum. “It doesn’t serve any [purpose]: not to save people, nor to raise the alarm,” she told Italian media.