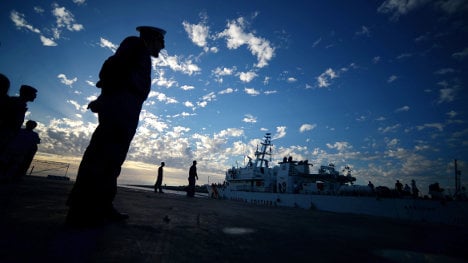 Some of Italy's coastguards were threatened by armed men who approached them by speedboat from the Libyan coast. Photo: Filippo Monteforte/AFP

The emergency rescue came on the same day Italy said it was evacuating staff from its embassy in Libya and suspending operations there, highlighting the worsening security situation in the violence-plagued country.

Some 2,164 migrants coming from Libya had to be saved from a dozen boats, Italian media reported, citing the country's emergency services.

By Sunday evening around 520 migrants were on board an Italian navy ship, the TGcom24 television station's website said.

More than 900 other migrants were picked up by coastguard and customs police boats, while the rest were rescued by various ships in the area, the TV station said.

The Italian transport ministry said some of its coastguards had been threatened by four armed men earlier in the day who approached them by speedboat from the Libyan coast.

The Kalashnikov-wielding men forced the rescuers to return a boat that had been emptied of migrants, the ministry said in a statement.

Last year, more than 3,200 people died while attempting to reach Italy by boat from North Africa. The United Nations has described the sea crossing as the most dangerous route in the world.

On Friday, some 600 migrants on board six dinghies were rescued by the Italian coastguard and merchant vessels around 50 miles off the Libyan coast.

But in a major tragedy last week, more than 300 migrants died in the Mediterranean Sea when their overcrowded rubber dinghies collapsed and sank in stormy weather.

The victims were among migrants mainly from sub-Saharan Africa who had embarked on the perilous journey from a beach near Tripoli.

The deaths underscored the limited means and scope of Triton, an EU-run mission which took over in November from the Italian navy's Mare Nostrum search and rescue operation

Italy decided to scale back the mission after its EU partners refused to share running costs of around €9 million ($10 million) a month.

Italy has seen a surge in migrants leaving in boats from Libya as the country has sunk deeper into chaos.

The Italian foreign ministry on Sunday said it was pulling out staff from its embassy in the former colony.

The ministry said the embassy – the last Western mission to remain open in Libya – has "suspended its activities because of the worsening security situation".

In total, about 100 Italians were being evacuated by ship from the north African state, foreign ministry sources said.

Since dictator Moamer Kadhafi was toppled and killed in a Nato-backed revolt in 2011, Libya has been plagued by conflict among rival forces battling for control of key cities and the country's oil riches.

The notoriously brutal Islamic State group is now also active in the country and on Sunday released a video purportedly showing the beheading of Egyptian Coptic Christians the jihadists say they captured in Libya.

Italian Defence Minister Roberta Pinotti said in an interview with Il Messaggero newspaper Sunday that the risk of jihadists arriving in Italy on boats carrying immigrants from Libya "could not be ruled out".

She said Italy was ready to lead a coalition from Europe and north African states to battle against the advance of jihadists in Libya.

"The risk is imminent, we cannot wait any longer. Italy has national defence needs and cannot have a caliphate ruling across the shores from us," Pinotti said.

Italian Prime Minister Matteo Renzi told public television on Saturday that Rome was committed to intervening in Libya, and called for a stronger United Nations mission.

"We have told Europe and the international community that we have to stop sleeping," he said.