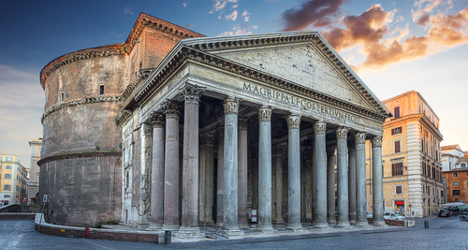 Rome's Pantheon could be one of the monuments to come under greater protection. Pantheon photo: Shutterstock

Soldiers could be brought in this week to protect sensitive sites, including the Colosseum, Pantheon and Vatican Museums, Corriere della Sera said. Other monuments and museums, in addition to churches, may also be protected by the army.

The report also noted upped security outside embassies such as those of the US and Libya. A spokesperson for the Libyan embassy was unavailable to comment when contacted by The Local, while the US outpost said it would not discuss specific security measures.

“We regularly review our security stance in light of current events to ensure the safety of our American and locally employed staff,” the embassy said in a statement.

Italy’s defence and interior ministries were not immediately able to confirm the Corriere report, which comes after the government proposed 4,850 soldiers be brought onto the streets to protect citizens. The new anti-terrorism measures could also see increased jail terms for people who join extremist groups fighting abroad.

Immediate concerns over security in the Italian capital follow a video published by Isis, in which the group in Libya threatened they were “just south of Rome”.

The Italian government on Sunday closed its embassy in the Libyan capital Tripoli, as violence escalated in the country.

The repatriation of Italian citizens came as Egypt launched airstrikes against Isis militants in Libya, after the group published footage of 21 Coptic Christians being beheaded.

“We are following events closely and with concern but there is no need to jump from total indifference to hysteria and an unreasonable reaction,” he said on Monday.