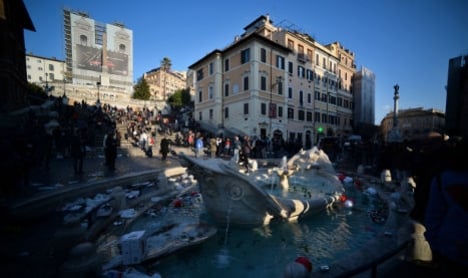 The drunken hooligans damaged one of the city’s most treasured fountains, the Fontana della Barcaccia. Photo: Filippo Monteforte/AFP

A total of €7,745 has so far been raised on the Scusa Roma (Sorry Rome) crowdfunding page, with over 300 donations being made in three days.

The gofundme page was set up by Elisabeth Jane Bertrand, a Dutch woman living in Tuscany, in response to her nation’s football fans rampaging through Rome last week.

Feyenoord supporters trashed much of Rome’s Campo de’ Fiori and Piazza di Spagna, before they were pushed back by riot police.

The drunken hooligans damaged one of the city’s most treasured fountains, the Fontana della Barcaccia, which had recently been unveiled after lengthy restoration work. The overall cost of the hooliganism to the city was set at €3 million.

While the Scusa Roma page will go little way to fitting the bill, the fundraiser is aimed at showing Italians that 99.9 percent of Dutch people want to support rather than destroy Rome.

“Forgive us for sending you the worst examples of our citizens. But I promise that you will receive two million visitors from the Netherlands that are only the best examples,” Bertrand wrote on Facebook.