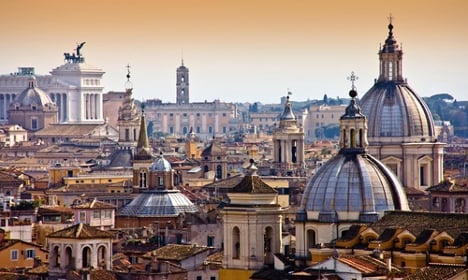 Rome has hundreds and hundreds of churches. Rome photo: Shutterstock

You will never go thirsty in Rome, which boasts more drinking fountains than any other city in the world. But how many? Over 2,000, says Mekomy guide Esther Maurini.

Every time you order a cappuccino, you’re making a reference to an order of Roman monks. The word originates from the Italian cappuccio – meaning ‘hood’ – a reference to the dress adopted by Rome’s Capuchin friars. The Capuchin crypt is still decorated with the bones of 4,000 deceased monks from the order, guide Federica Dal Palù says.

You’ve been to the Colosseum, seen the Spanish Steps, but how about the Pyramid? It was built in the first century BC as a tomb for Roman politician Caius Cestius. Restoration work is currently being funded by a Japanese donor.

In addition to this unique site, Rome has eight Egyptians obelisks, Christiaan Santini tells us.

It’s impossible to stroll through Rome without hearing church bells ringing out. But how many churches does the city hold? Over 900, Dal Palù says.

The word ‘palace’ takes its name not from a grand palace or royal residence, but from Rome’s Palatine Hill. In the heart of the ancient city, it’s one of the seven hills of Rome, says Marco Massa, Mekomy’s Italy manager.

The Vatican makes Rome the only city in the world to contain an entire state within its walls, says Santini.