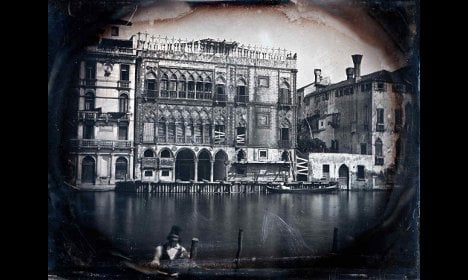 If it were not for the gathering of top hats in the centre of St Mark’s Square, the black and white photo below may well have been taken today.

In a striking sign of the timeless nature of Venice, a series of photographs published this week capture some of the city’s most famous sites in the 1840s and 1850s. It is only the occasional figure stepping into the shot, in 19th-century dress, which gives away the age of the photographs.

Otherwise many of the scenes remain in 2015; laundry hangs from windows, buildings appear to be crumbling into the canals, while the Doge’s Palace dominates the heart of the watery city.

The photographs are known as “daguerreotypes”, referring to the early technique which used a silvered-copper plate rather than a negative to capture an image.

Those taken of Venice once belonged to John Ruskin, a British art critic, writer and artist, and make up the world’s largest collection of daguerreotypes of the Italian city.

Now the photographs have made their way into a new book – Carrying Off the Palaces: John Ruskin’s Lost Daguerreotypes – which holds hundreds of daguerreotypes taken in Italy and elsewhere.
http://www.quaritch.com/books/U31/

Launching the book, co-publisher Ken Jacobson said the photographs’ discovery “has been the most exciting of our career.

“Ruskin’s daguerreotypes would be a sensational new revelation in the history of photography even if he were completely unknown. We hope the work will be as intriguing to others as it has been to us,” he said.