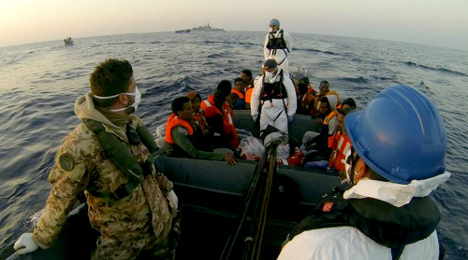 Koji Sekimizu, secretary general of the International Maritime Organization (IMO), called for a multinational effort to ensure not only the safety of the migrants but also to target those who smuggle them out for profit despite the risks.

"This is a very serious issue," Sekimizu said in a keynote address at Sea Asia, a major maritime conference and exhibition in Singapore.

"It is time to really think about how to stop the very dangerous and unsafe passage of migrants on board small, very unsafe boats. We should take action."

He said his office was working with other UN agencies to establish a database of the people smugglers as an initial step to target them, but would not give any more details.

More than 3,000 migrants perished in the Mediterranean last year, according to Sekimizu.

In the latest incident, some 800 people are feared to have died when a boat packed with migrants capsized near Libya on Sunday.

The victims, including an unknown number of children, were locked in the hold or the middle deck of the 20-metre boat which keeled over in pitch darkness after colliding with a Portuguese container ship answering its distress call.

The United Nations refugee agency said those on board included Syrians, Eritreans and Somalians.

Around 200 body bags were lined up on the UK's Brighton beach on Wednesday by Amnesty International supporters, in protest at the British government's "shameful" response to the Mediterranean crisis.

"If we do nothing, I think this year we will see half a million of migrants crossing over the Mediterranean and potentially we will see probably 10,000 of deaths if that is the case," Sekimizu warned.

"We should not only address the situation of search and rescue but also we should address the smugglers, the traffickers behind the scene," he said, adding that European governments must play a crucial role.

Sekimizu cited the global effort that successfully reduced the number of pirate attacks off the coast of Somalia as an example of how the international community could come together on the Mediterranean migrant crisis.

Italian officials believe there could be up to one million more would-be immigrants to Europe waiting to board boats in conflict-torn Libya.

Many of them are refugees from Syria's civil war or persecution in places like Eritrea. Others are seeking to escape poverty and hunger in Africa and South Asia and secure a better future in Europe.

SEE ALSO: Mare Nostrum could be relaunched in 48 hours