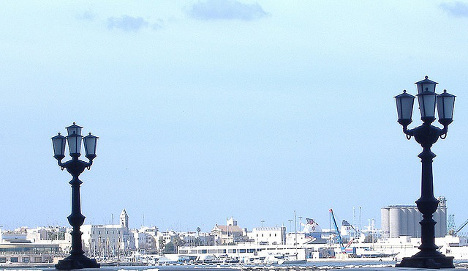 The migrant died on a ferry linking Greece with Bari (pictured). Photo: PayHere

The incident took place on Tuesday night on a ferry linking Igoumenitsa in northwest Greece with Bari across the Adriatic Sea in southeast Italy, Ana said.

As the bus drove onto the ferry ramp, the 21-year-old migrant was struck and fatally injured by the axle.

Igoumenitsa, about 400 kilometres (250 miles) northwest of Athens, is one of the main crossing points for migrants from the Middle East and Asia trying to reach western Europe.

The young man's death came two days after three migrants, including a child, died when a boat carrying 93 people crashed onto rocks off the Greek island of Rhodes.

The number of illegal migrants arriving in Greece, many aboard rickety boats from nearby Turkey, tripled in the first three months of the year, compared to the same period in 2014.

The surge in numbers in Greece is mirrored by the growing tide of migrants landing on Italy's shores after perilous sea crossings from north Africa that have already claimed hundreds of lives this year.

On Thursday, EU leaders are to meet to discuss the migrant crisis.