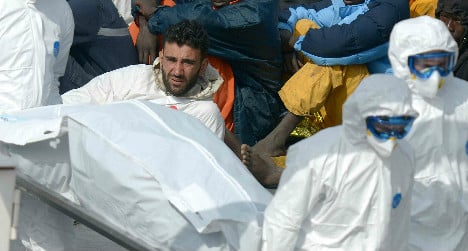 Mohammed Ali Malek, 27, appeared before a judge in the Sicilian city of Catania after being accused by prosecutors of causing the tragedy.

The 20-metre former fishing boat which Malek was in charge of capsized and sank off Libya in the early hours of Sunday after a collision with a container ship that had answered a distress call.

Malek, who faces a potential indictment for culpable homicide and causing a shipwreck, stands accused of causing the collision through steering mistakes and of allowing the boat to put to sea with far too many people on board.

Prosecutors also want him to be charged with illegal confinement on the basis of testimony from survivors that hundreds of those on board were locked into either the hold or a lower deck.

The skipper is also alleged to have been drinking and smoking hashish whilst in charge of the boat.

Prosecutors have asked for him to be charged only with aiding and abetting illegal immigration and his lawyers were expected to argue that he had been a migrant enlisted to help crew the ship rather than a member of the people smuggling network responsible for organizing the voyage.