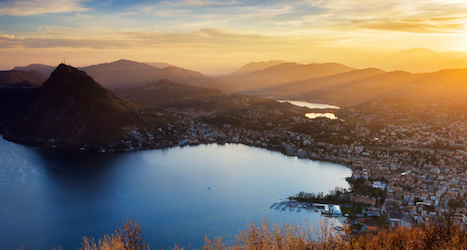 Dollfus is based in Lugano, the third largest banking centre in Switzerland after Zurich and Geneva. Photo: Switzerland Tourism

Italian financial police (Guardia di Finanza) from Varese northwest of Milan said that Filippo Dollfus, a former board member of the Cornèr Bank in Lugano in the Swiss canton of Ticino was arrested last week.

Dollfus, aided by a Milan accountant arrested in March 2013, is accused of helping clients in the creation of shell companies based in Switzerland, Luxembourg and the Netherlands.

He also allegedly provided assistance in the creation of offshore companies in tax havens.

Ledgers seized from the accountant identified hundreds of accounts of wealthy Italians who hid “several billion euros” from the taxman over 40 years, the Italian website VareseNews reported online.

The paper reported that Dollfus was arrested in Milan after he crossed the border from Switzerland to attend the communion of his niece.

Citing information from the Italian authorities, the ATS news agency in Switzerland reported that the former Swiss banker operated a company established in Lugano, as well as a branch in Milan.

The company, acting as an intermediary, handled financial operations totalling around 800 million euros, from the initial evidence, according to the financial police, ATS said.

But the Italian police said this amount could be significantly higher, describing a “veritable multinational (financial) recycling” operation.

The bank issued a statement in Italian on its website in which it distanced itself from “the arrest of Filippo Dollfus”.

It underlined that Dollfus has not been a member of the bank’s board of directors since March 2012 and that his activities as a trustee had “nothing to do with the bank”.

The bank said the Piotrkowski-Dollfus family is a minority shareholder in the bank and that no family representative, including Filippo Dollfus, has ever played an operating role with the banking group.

“The fact he was arrested is not good for the image of the bank, but I want to clarify that his fiduciary activities have nothing to do either with the family or Cornèr Bank,” Piotrkowski is quoted as saying.
In any case, until proven otherwise, Dollfus should benefit from the presumption of innocence, he added.

Founded in Lugano in 1952, the Corner Bank Group specializes in private banking, as well as credit cards (Cornèrcard) and online trading.

It operates branches in Chiasso and Locarno (both in the canton of Ticino), Zurich and Geneva, and has affiliates in Luxembourg and Nassau in the Bahamas.