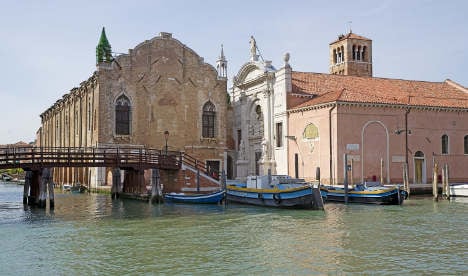 Entitled "La Moschea", the installation was created in the Santa-Maria della Misericordia, a former Catholic church that was rented to Iceland's national pavilion by its private owner.

Heralding the initiative as promoting religious tolerance, several Muslims came to pray at the building.

Leaving their shoes at the door, the worshippers faced Mecca and knelt to pray whilst around them visitors toured the exhibition.

The installation, by Swiss artist Christoph Buechel, aims to draw attention to the absence of a mosque in the historic centre of Venice – a city with historic trading links to the Muslim world.

But city authorities expressed reservations, citing, among other things, the risk of the building being attacked by anti-Muslim elements – or, at the other side of the spectrum – Islamist radicals.

The president of Veneto region, Luca Zaia, called the installation a "provocation".

"The real issue", he said, was "not freedom of religion but respecting the rules" of an international art exhibition.

The jury on Saturday awarded the Golden Lion for Best National Participation to Armenia for a pavilion about the Armenian diaspora.

The Golden Lion for Best Artist went to Adrian Piper of the United States pour "The Probable Trust Registry: The Rules of the Game #1-3".