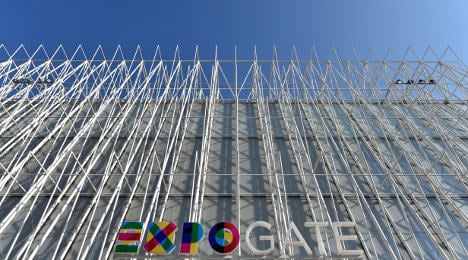 A Chinese communications manager at the Expo 2015 world fair in Milan allegedly bit an Italian police officer when she was asked to show her passport. Photo: Giuseppe Cacace/AFP

The woman, 39, is a senior representative of the Chinese pavilion at the Expo trade fair, and is responsible for communications at the agriculture and gastronomy-themed event that runs from May until October, Italian daily La Repubblica reported.

During an inspection of her lodgings, Italian financial police asked the woman and her colleagues to hand over their passports, according to media reports.

After several minutes she reportedly started asking for her passport back and then allegedly bit the hand of one of the police officers.

Her lawyer said she feared she was being duped because the officers were not in uniform, daily Corriere della Sera reported.

Her version of events differs from that of the Italian police, who say they found her in a warehouse when they were carrying out inspections in uniform for counterfeit products bearing the Expo brand.

She was arrested for resisting a public official, then later released.