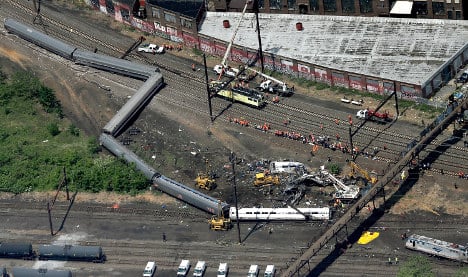 Investigators and first responders work near the wreckage of Amtrak Northeast Regional Train 188 the day after the crash in north Philadelphia. Photo: Win Mcnamee/Getty Images/North America/AFP

Giuseppe Piras, 40, was killed after an Amtrak train travelling from Washington to New York derailed in Philadelphia on May 12th.

The Italian was killed along with seven others, and was one of the last victims to be pulled from the wreckage. Over 200 people were injured, 11 of them critically.

Piras, who is from the town of Ittiri on the Italian island of Sardinia, had been travelling to New York City to sell wine and olive oil for a company in Sardinia, NBC New York reported.

He had taken the train after missing a flight, his family told the Italian news website Leggo.

Piras was identified after his family contacted the Italian consulate in Philadelphia. The family were originally told that Piras was alive and on his way to New York, but it later turned out that an Amtrak representative had made a mistake.

The family had requested for Piras’s body to be kept in Philadelphia so that they could claim it.

But in what has described as a “bureaucratic nightmare”, Piras’s body was moved to a funeral home in New Jersey without his family’s consent.

To make things more complicated, all the paperwork had to be shuttled between two states, NBC said.

Piras’s brother, Antonio, travelled to America on the weekend but the family have been told that they may not be able to bring their relative home until Friday.

The cause of the crash has not yet been confirmed.