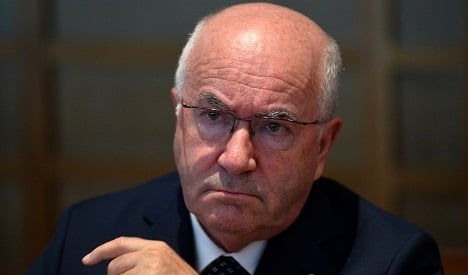 The president of Italy's football federation (FIGC), Carlo Tavecchio, pledged to eradicate the "criminals and tricksters" from the game. Photo: Alberto Pizzoli/AFP

“We will rid Italian football of the criminals and tricksters,” Tavecchio said in an interview on the Mattino Cinque television programme a day after the “Dirty Soccer” scandal led to 50 arrests in connection with illegal match-fixing in 31 matches, mainly in Italy's lower professional leagues.

A former president of Serie A giants Napoli and an ex-Serie A player are among 70 people being probed by investigators from Catanzaro following months of wire-taps and investigation of club officials, players and criminals from eastern-Europe, according to reports in La Gazzetta dello Sport.

Mario Moxedano, the president of Serie D side Neapolis who was briefly the president of top flight club Napoli, was among those arrested on Tuesday as part of an investigation by prosecutors.

His son Raffaele Moxedano, the captain of Neapolis, was also arrested on suspicion of being involved in fixing five of the 31 matches under investigation.

Francis Obeng, a Ghanaian briefly on the books of Serie A side Roma, was reportedly detained by police while at the home of current Sampdoria player Afriyie Acquah on suspicion he helped “sell” matches of his current club, Santarcangelo (Lega Pro) for up to €10,000 a time.

The probe has seen police secretly record 10,000 conversations between players, club officials and betting syndicates with links to the Calabrian crime syndicate, the 'ndrangheta.

Running to 1,267 pages, it has focused largely on teams and clubs from Italy's Serie B downwards although one Serie A side, Sassuolo, has been implicated for a suspect Italian Cup game, against Pescara, in December 2014.

In all, 33 teams have been implicated.

Gazzetta's report said investigators have uncovered a system in which criminals could pay between €5,000-€50,000 to “buy” the outcome of a match, allowing individuals to place huge bets and reap the consequent rewards.

Elio Romano, one of the investigating magistrates, said the case highlighted a “sick” world in which the “fragility of players is intertwined with the cunning ruthlessness of sports managers and organised crime”.

“The most horrifying thing is to see what football has become,” Romano was quoted as saying in Gazzetta's report.

“What we're faced with is a new criminal drama in which the protagonists are making a mockery of the passions of true supporters. We need to make an urgent reform of the rules governing sports betting that has polluted the sports world and everything in it.

“Football is a sick world… in which the fragility of players, seduced by the myth of earning quick and easy money, is intertwined with the cunning ruthlessness of sports managers and organised crime against a backdrop of general indifference of the football clubs.”

It is the latest in a string of betting and other scandals to tarnish the reputation of Italian football.

Authorities uncovered compelling evidence of attempted or actual match-fixing related to betting in 1980 and 1986.

The first of these two “Totonero” scandals famously resulted in Paolo Rossi being banned for three years.

The ban was reduced to two years on appeal and Rossi returned to fire Italy to World Cup glory in Spain in 1982.

A major 2006 investigation into the corruption of referees resulted in Juventus being relegated to Serie B and a new scandal centred on betting on minor details of matches rather than results erupted in 2011.

Known as “Calcioscommesse” that investigation overshadowed Italy's Euro 2012 campaign with investigators visiting the national team's training camp to question defender Domenico Criscito, who was subsequently withdrawn from the squad. Criscito was later cleared of any wrongdoing.