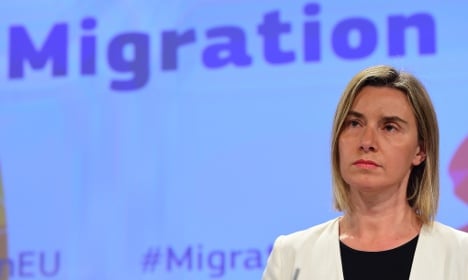 “We must be ready to share the responsibilities," said Federica Mogherini, the EU's foreign policy chief. Photo: Emmauel Dunand/AFP

Speaking in Rome, Mogherini said Europe could play a constructive role if only each state plays its part. “We must be ready to share the responsibilities…The people that travel across the Mediterranean don’t travel towards Italy or Malta, but towards Europe,” she said.

Mogherini was speaking after the EU outlined plans for European countries to accept a number of migrants arriving on the region’s southern shores. While Italy has seen more than 200,000 people arrive by boat since the start of 2014, many migrants travel onwards to countries such as Germany where they seek asylum.

The EU plan was intended to more equally share the burden of the migration emergency through a quota system, although the proposal lacks the support of a number of countries including France and the UK.

Another key point of Brussels’ new proposals, outlined following the death of around 800 migrants in one shipwreck last month, foresees the direct targeting of the people smuggling network.

As the EU seeks UN approval on such naval missions in the Mediterranean, Mogherini stressed such military operations was only one piece of “a much broader strategy”.

“The most important task, today, is that of saving those who risk their lives in Mediterranean waters,” she said. “Everything else in secondary, but at the same time just as essential.”

The EU’s proposal to directly target smugglers has come under criticism as ignoring the source of the migration crisis, prompting calls for Europe to do more to address conflict and poverty in migrants’ home countries.

But Mogherini said such issues were part of EU policy: “You can’t talk about immigration without speaking about economic growth and the fight against poverty.