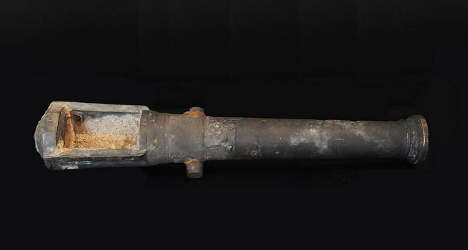 A 17th century Venetian cannon was picked up by authorities as it was being smuggled into the US. Photo: Ambasciata USA Italia

The artefacts were unveiled in Rome on Monday following lengthy operations led by Italy’s police force dedicated to protecting cultural heritage, working alongside the US Homeland Security Investigations.

The officials followed the trail from Italy to nine US cities, including Miami and San Francisco, where stolen objects were seized and repatriated.

Investigators in New York discovered three frescoes stolen from the superintendency of Pompeii in 1957, one of which depicted a woman holding a small wine pitcher.

They had formed part of an American tycoon’s private collection and were about to be sold at auction when seized, Italy’s culture ministry said in a statement.

Three other frescoes stolen in the 1950s raid had previously been discovered. A fresco of a peacock was discovered in Switzerland, one of wine god Dionysus had been taken to the UK, while an sacrifice fresco was found in the US.

Other items returned to Italy include a 17th century Venetian cannon, picked up by authorities as it was being smuggled into the US, and a number of other items over 2,000 years old.

One particularly valuable discovery was a Roman-era marble lid of a sarcophagus, found up for sale in a New York gallery for $4.5 million (€4.1 million).

IN PICTURES: US returns haul of robbed Italy artefacts