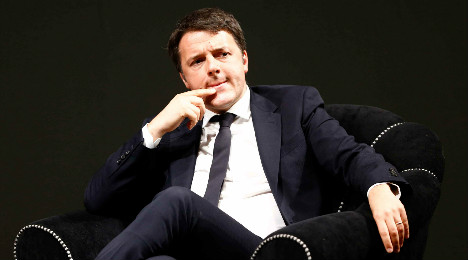 The elections are seen as a key test for Prime Minister Matteo Renzi. Photo: Pierre Teyssot/AFP

Sunday's polls were the first in Italy, which is slowly emerging from recession, since European elections a year ago in which Renzi's Democratic Party (PD) won with just over 40 percent of the vote.

Observers will also be looking closely at the battle on the right between the anti-immigration Northern League, led by rising star Matteo Salvini, and Berlusconi's Forza Italia (Go Italy).

Twenty million voters are eligible to elect governors in seven of the country's 20 regions, as well as the mayors of more than 700 municipalities.

Counting is expected to continue through the night with initial results due to be announced on Monday.

At present, five of the seven regions holding elections are governed by the left, one is led by the Northern League and another by Forza Italia.

According to exit polls, the PD candidate was set to emerge third in the northern region of Liguria, where Renzi's ally faced rivals in both a left-wing dissident and the right-wing Giovanni Toti, supported by both the Northern League and Forza Italia.

In Campania in the south, by contrast, the PD's candidate Vincenzo De Luca looked to be slightly ahead of the Forza Italia incumbent.

A victory by De Luca would not be without controversy – he has been named in a list of 17 “unpresentable” candidates by an anti-mafia commission.

De Luca has a conviction for abuse of power and faces trial on other charges, including fraud, and could be banned from taking office.

Although an embarrassment for Renzi, the 40-year-old premier's popularity nevertheless appears to remain high after nearly a year-and-a-half at the helm.

The results will also provide an indicator of Berlusconi's political future. The 78-year-old media magnate is keen on making a comeback after his acquittal on charges of paying for underage sex and a stint of community service for tax fraud.

Thirty elected members of Forza Italia have already announced their departure to join the man once considered Berlusconi's heir apparent, Raffaele Fitto, who has broken away from the old leader.

Berlusconi caused a stir on Friday when he swept into a leftist election rally flanked by six bodyguards, believing that he was at a Forza Italia event.

He beat a hasty retreat after being informed of his mistake by a member of his entourage in an embarrassment that the La Stampa daily on Sunday called “tragi-comic”.