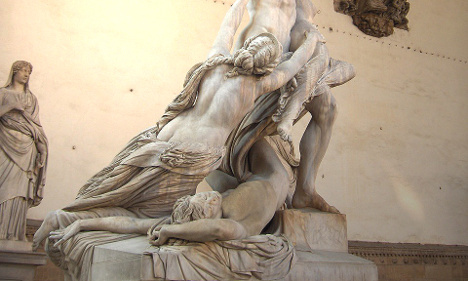 A section from Pio Fedi's Rape of Polyxena. Photo: JoJan/Wikicommons

Located in the Loggia dei Lanzi, the 150-year-old artwork depicts Polyxena, the daughter of Queen Hecuba and King Priam of Troy, being abducted by Pyrrhus, who is stepping over the body of her murdered brother Polites as Hecuba begs him to let her daughter go.

The finger was snapped off the left hand of the figure of Polites who lies at Pyrrhus’ feet.

The incident happened on Monday afternoon at around 5:30pm but the damage was only spotted on Tuesday, Il Sole 24 Ore reported.

On Wednesday Antonio Natali, director of the city’s Uffizi gallery which adjoins the Loggia dei Lanzi, called for the statue to be protected from overcurious tourists by a chain, adding that it was the third time the statue has been vandalized since 2012.

“Damaging art is one of the most horrific and cowardly acts possible. I hope that the vandal who damaged the Rape of Polyxena yesterday in the Loggia dei Lanzi will be brought to justice soon,” Nardella wrote on Tuesday.

“Whoever strikes culture strikes at the heart of history and the identity of a community. I will be promoting harsher punishments for crimes against artistic heritage in parliament, as with environmental crimes, with imprisonment of up to 15 years and double the limitation periods.”

Police are now examining CCTV footage to determine who is responsible for the damage.

The statue will be restored by Alberto Casciani who restored the statue after a similar incident two years ago.

Sadly, acts of vandalism of this kind are not uncommon in the city. In August 2013, an American tourist snapped a finger of a 600-year-old statue in Florence's Galleria dell'Opera di Santa Maria del Fiore by 14th- and 15th-century sculptor Giovanni d’Ambrogio. Ironically – or perhaps worryingly – the man turned out to be a surgeon.

Later that year, a woman from Turkey was fined €160 ($180) for vandalism and told to clean the Ponte Vecchio bridge in the Tuscan city after attempting to scrawl names on it with nail polish.

That same month, a German tourist was also ordered to clean the famous bridge and pay a €160 fine after his daughter drew on it with felt-tip pen.